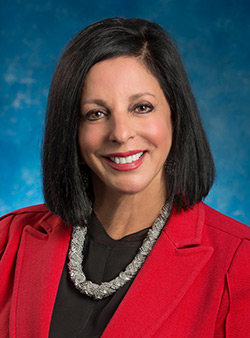 As president Lesley Di Mare looks back on the past six years, she wished she could have spent more time getting feedback through climate survey assessments. However, she established the first renewable merit based scholarship program.

“I love CSU-Pueblo,” said Di Mare. She found CSU-Pueblo to be a well-rounded comprehensive university that allows options for students. Di Mare believes CSU-Pueblo is the flagship for the southern Colorado region, where many great things can come from.

She has found many students at the university are highly motivated and driven. The students to her are what fuel the campus and create environment for all the events.

When she was younger, she always came out to Colorado Springs to visit her Aunt and Uncle. During her visits, her uncle would talk about how amazing the university is in Pueblo.

Before becoming president at CSU-Pueblo, she worked for Nevada State College and received a phone call about being nominated for the president position here. Her uncle sadly passed away before he was able to see her become president of the university in Pueblo.

With being in a high leadership role, Di Mare has faced different situations. She gave an example of when her and her husband first moved here. When they would go out before the person could introduce her as president they would be shaking her husband’s hand. For this situation she said you have to not default to the norms of  society.

“You can’t give up what makes you, you including the part of being female,” said Di Mare.

Her inspiration comes from many people around her especially working females. Her best friend was one of the first people she hired at Arizona State College, she is a mother of two children with one that has special needs. Di Mare says she does not know how she does it all but it is inspiring to her.

She said that self-reflection is highly important in life. You have to understand that people won’t always agree with you, things will be said about you and that is when you have to reflect on it to find ways to strengthen yourself to stay strong.

Di Mare used six words to define the way in which she would describe her leadership style including fair, realistic, understanding, risk taking, collaborative and decision making.

She said someone once said Leslie knows what she doesn’t know. Meaning that by surrounding yourself with others is how you learn and you can’t be intimidate by what you don’t know. An example she gave was about the legislative process, while she was going for the ICR designation for the university. She knew it was important to know how the process worked as a whole.

For current CSU-Pueblo students, she said be sure to talk to your faculty advisor, have a mentor, join clubs and be around people. Everyone has moments where they hit a wall and feel blocked.

When she was writing her dissertation for her PhD. At the time she was teaching nine classes at California State College- Los Angeles and had eight months to put it together. She thought she couldn’t write another word, so she would begin to start reading and thinking, and then she would find her inspiration to write again.

For future CSU-Pueblo students, Di Mare said the best things you can do is get connected before you come, join clubs, have a group of people you can go to and it can be hard but do your best to meet people.

“CSU-Pueblo does feel like a family, it has been the best part of my life. The students breathe life into you,” said Di Mare.