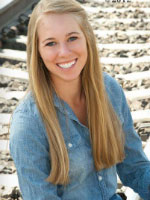 Geolat, who declared minors in marketing and leadership, hails from Monument, Colorado.

The only child of Tom and Deb Geolat came to CSU-Pueblo in 2013. In 2014, she became a resident assistant where she met Bri Mason and Alex Hyland and made lasting friends.

Two years later, Geolat started a job as a student ambassador at the CSU-Pueblo Visitor Center, welcoming new students and giving tours around campus.  She joined ASG shortly after that.

“I’ve always thought about ways in which I wanted to make positive changes on campus and being a part of ASG allows that to happen,” said Geolat.

Geolat’s responsibilities include organizing weekly meetings and overseeing projects. She is also involved in CSU-Pueblo’s Enactus club, a chapter of the global non-profit organization that partners with prestigious business leaders and higher education.

In 2015-16, Enactus members made a big push for a recycling program on campus by placing recycling containers in the psychology building and the recreation center.

“We were able to do audits on the accumulated waste, and we realized how much money the school was saving by recycling,” Geolat said.

“They plan on keeping up with the recycling program and are working on extending it into the community.”

Geolat also started the CSU-Pueblo chapter of Love your Melon, a campus-wide organization that raises funds for children with pediatric cancer by selling beanies and other apparel.

After she graduates spring 2017, Geolat aims to find a job where she can combine her passion for the hospitality industry, her marketing knowledge, public relations skill set and her love of Colorado.

She completed an internship at the Broadmoor Hotel in Colorado Springs this summer.

Geolat offered some advice to future ASG leaders and students who want to become involved in campus organizations.

“If you’re passionate about the school and want to create positive change, then join ASG,” Geolat said.

“Becoming involved on campus will allow you to meet new friends as well as create a strong basis in leadership for the rest of your life.”

When she has free time, Geolat takes advantage of the year-round outdoor activities Colorado has to offer. Hiking is one of her favorite past times. She recently ascended the 14,114 feet incline of Pikes Peak, which took her seven hours to complete.

Although it was a challenge and the hardest thing she has ever done, the doughnuts and hot chocolate at the top helped make it worthwhile, Geolat said.

Students who are interested in becoming involved with the CSU-Pueblo ASG, can join Maggie and other members during their weekly meetings on Tuesdays at 6 p.m. in the GCB.