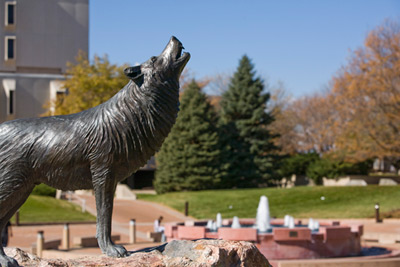 With previous projections of a 4.7 percent decline in enrollment for the 2016-17 school year based on regional enrollment trends, Colorado State University-Pueblo came in not quite on top but leveled out.

“We far exceeded those projections by coming in flat. Now, flat may not sound very good to you, but believe you me, it’s better than being down. We will continue to see enrollment initiatives…,” President Leslie Di Mare said at the State of the University Address, Sept. 12.

The retention rate was previously at 65 percent and grew to 66 percent. Di Mare said she is hopeful that this will continue and reach 70 percent with the help of new software called Starfish, which is designed to help universities manage and increase retention rates.

Currently, CSU-Pueblo has enrolled students from 43 states and 34 countries and strengthened enrollment by students from Arizona, New Mexico, Hawaii and Washington, according to Chrissy Holliday, vice president of enrollment management and student affairs.

“The university has been working on bouncing back from an enrollment decline in 2012 after new policies were implemented correcting what had been a downward trend in our new student enrollment, stabilizing overall enrollments,” Holliday stated.

“Then building those to optimum levels that will allow us to maximize institutional resources,” she continued.

“CSU-Pueblo has turned a corner… We said it would take four years, and it did, but the point is we did it. It is hard to move the dial on these numbers, but as long as we’re moving forward, that is what counts,” Di Mare said.

Student life and experience at CSU-Pueblo are the main focuses in growing the enrollment and retention figures in the future, according to Di Mare.

Holliday says the administration is currently looking to implement high-in-demand and student-requested degree programs to increase further enrollment in the future.

“I believe CSU-Pueblo has room to grow, and I think doing so in a measured and intentional way, will enable us to attain enrollment consistency,” Holliday said.

“It all comes down to building relationships with prospective students and their families that allow them to see this institution as the right place for them. Then delivering excellent service, academics and student life experiences once they are here,” Holliday added.

Additionally, she explained that enrollment trends could be related to economic issues and even variations in high school graduation, birth and death rates.

“Enrollment is a multifaceted issue. In our case, we are emerging from a period of decline in high school graduates regionally,” Holliday said.

“In addition, transfer student populations can be very volatile one year to the next and are easily impacted by changes in the economy. College enrollments tend to climb when the economy is bad and jobs are hard to find, then dip once people begin returning to the workforce,” Holliday added. 

Di Mare said she hopes to see growth in the freshmen class, transfers and nontraditional students in the years to come after her retirement from the university in June 2017.

She remains confident that growth can still be made even after she leaves.

“It took the whole university to make this happen, not just me,” Di Mare said.

LEAF Club aims to promote a healthy self, community and Earth