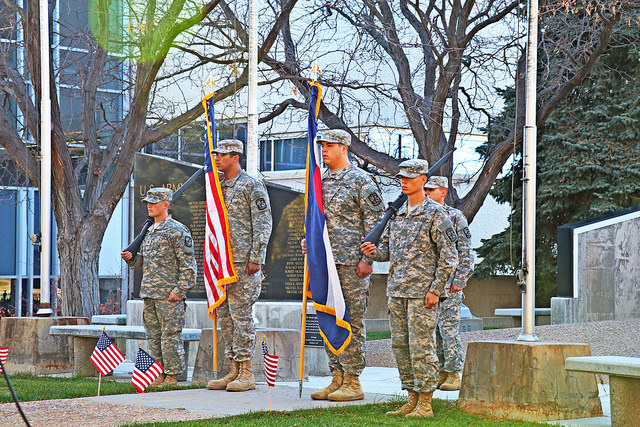 A brisk breeze ruffled the American flag as it flew against a clear sky on Veterans Day. Community members, students and faculty gathered at the Southeast Asia Memorial Nov. 11 at 2 p.m. to celebrate those individuals who have and currently serve in the U.S. military.

Dressed in black, the CSU-Pueblo Brass Ensemble opened the ceremony before four planes flew over the campus in different formations. Carolyn Sharp with Doss Aviation introduced the pilots and identified their last formation as the missing man flyby which was performed to honor the soldiers that have died while defending the country.

Veterans Upward Bound Director Jacobo Varela opened the ceremony and said, “We’re here today to honor our heroes, remember their achievements, their courage and their dedication, and to say thank you for their sacrifices.”

Veterans Day, known as Armistice Day before 1954, was chosen as a national holiday for Nov. 11 because in 1918 World War I formally ended on the 11th day of the 11th month in the 11th hour. “A day to remember not only those who fought in the Great War, but for every veteran. It is our duty and honor to give thanks to our veterans,” Varela said.

Varela also called for action to assist and support those who have served make the transition from military to civilian life.

“It will only be through our own personal actions that we can truly make it known how much you mean to us,” Varela said.

Di Mare said CSU-Pueblo strives to teach students the same qualities found in those that serve: bravery, risk taking, perseverance and loyalty. Di Mare recognized student veteran association members who were gathering food for homeless vets and experiencing what it’s like to be homeless by sleeping outside at the ThunderBowl.

The junior class of the President’s Leadership Program adopted the organization Veterans Overcoming Obstacles as their class project and hosted the warrior workout later in the day.

Guest speaker Col. Thomas A. Duncan is the commander of the Pueblo Chemical Depot that destroys the remainder of America’s chemical munitions stockpile. He is also the recipient of a defense superior service medal and bronze star.

Duncan said military workers and educators are both working toward improving our country, just with different approaches. When accepting someone’s gratitude for his service, Duncan said, “it’s not about an individual, it’s about the institution that we represent.”

Duncan went on to say if there was a silver bullet or solution for our country’s problems it would be education and the commitment to improving ourselves over time.

“The respect and admiration I have for people that are at institutions of higher learning matches the respect I have for folks that are serving in the military currently both at home and abroad, and for all of the people that have served,” Duncan said.

“I have never been in all my years of service in a community that gives more appreciation, more respect for their veterans.” Duncan’s final comments were that despite everyone’s differences “it is love of country that unites us.”

CSU-Pueblo student and military serviceman Isaac Long said, “I often find when every day stresses build up I catch myself looking at the American flag that flies from this memorial site, and it reminds me to never lose sight of what I am working to accomplish.”

Library in the Underground

Library to host film series throughout the semester