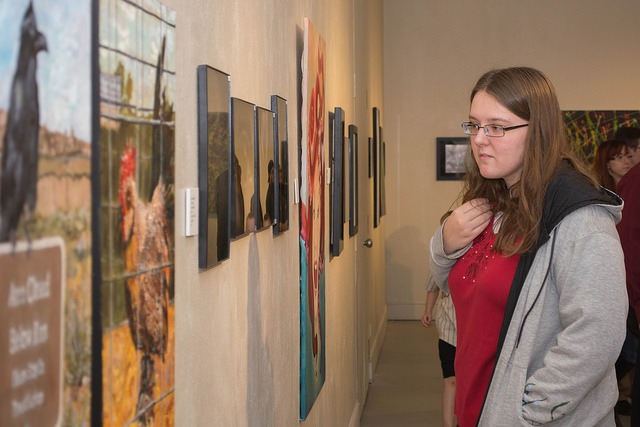 As the current fall semester winds down at Colorado State University-Pueblo, the university’s art gallery hosted its most anticipated annual event in the form of an exhibit that featured various students’ works.

The Student Art Award Reception, which was held at CSU-Pueblo’s Fine Arts Gallery Nov. 11 between 5 and 7 p.m., offered students, faculty and members of the Pueblo community a first look at students’ works of art.

The event attracts one of the biggest crowds in the gallery’s history. Caroline Peters, CSU-Pueblo assistant art professor and gallery director, said it is quite common for student galleries to attract large audiences.

“The student shows are always some of our most crowded,” she said.

CSU-Pueblo Art Club treasurer and student Edward Doyle said the club tirelessly promoted the gallery. “It’s really important for people to see this gallery; it’s a chance to see up and coming artists here in town and see who they are,” said Doyle, who had a ceramic piece featured in the gallery.

The curator of this year’s student gallery, Lisa Gedgaudas, has worked as a program director for Create Denver for several years and was brought in to provide a fresh perspective on the event.

Student submissions were plentiful, and the works were extensive in style, form and expression.

The gallery featured everything from urban photography that captured moments in life to an ice cream monster sculpture, which was indicative of the diversity of the contributions.

“It’s fun to see how the students’ art evolves and changes every year,” said professor of art Richard Hansen, commenting on the variety of gallery.

Some of the artists who participated in the gallery were also quick to remark on the impressive turnout and variety of art.

Bowman, who praised the various forms of art around the gallery, said even someone who isn’t well-versed in art could gain inspiration from the gallery.

Student artist Anthony Lucero said the gallery was unique in that one could immediately notice the experience prevalent in each piece.

Student artist Sara Cox was thrilled at the opportunity the reception provided for students to get their art and names out in public.

“The work looks different when it’s up there on the wall; it’s a big moment for a lot of these students,” said Cox, whose oil painting was featured in the gallery.

The student gallery did have a milestone of sorts as it was the first to have a portion devoted to student submissions that didn’t make the cut for the gallery, something of an “honorable mentions” area that was located down the hall from the Fine Arts Gallery on the curved wall.

This portion featured a diverse array of art, from digital media contributions to large-scale sculptures.

“It’s nice to see these people get their art showed even if it isn’t in the actual gallery,” said Alire, who had a digital media piece in the reject submissions and the gallery.

“It feels amazing; it’s a bit surprising,” said Morrow who added that this was the first gallery he was ever featured in.

Also awarded during the show was the people’s choice award for best art, which was voted on throughout the night by everyone in attendance.  The winner of the honor was student Molly Moreschini who said she was both shocked and inspired by the honor.

“I’m really insecure about my work, but this means a lot to me,” said Moreschini on her award.

The award reception was an expansive offering of CSU-Pueblo’s student art, but the gallery itself will be open for the remainder of the fall semester and will conclude early December.

Several works at the gallery are for sale in an effort to promote original local art and the artistic minds at CSU-Pueblo.

If one is interested in purchasing a piece of art at the gallery, one would need to contact Caroline Peters at caroline.peters@csupueblo.edu.

Hollywood-style training to be used in CSU-Pueblo's nursing program