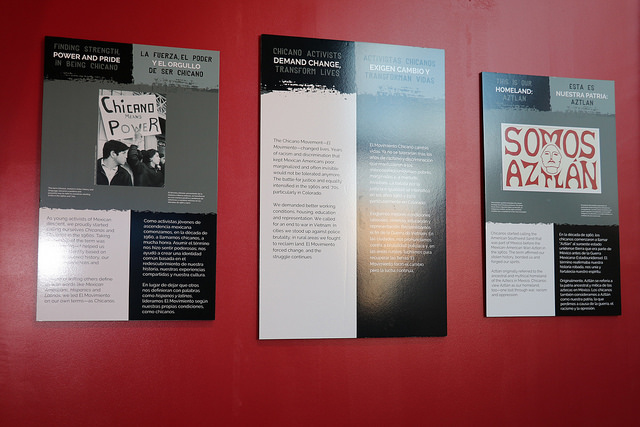 The exhibit, which is sponsored by Colorado State University-Pueblo, is on display until Dec. 12.

CSU-Pueblo students with a valid ID will receive a $1 discount on the $5 admission fee for the duration of the event.

Students can access more information on Chicano studies options at the university by visiting here.

The exhibit coincides with the recent book release of “El Movimiento de Pueblo: An Anthology of Chicana and Chicano Activism,” which offers extensive information surrounding the Chicano Movement in Colorado.

According to plaques posted throughout the exhibit, members of the Pueblo played a key role in the Chicano Movement during the 1960s and 1970s.

During those years, students formed organizations that rallied for the inclusion of Chicano studies courses at Southern Colorado State College.

The exhibit also explains in great detail how members of the Chicano Movement worked to help expand health care, set up school reform, help create safer neighborhoods and other important aspects of life in Pueblo.

Museum curators used a combination of informative plaques, archived TV news reports, era-appropriate clothing, and historical data to provide insight into the movement.  A brief history of the Chicano Movement in Colorado can be found here.

The exhibit is on display in the main part of the  El Pueblo Museum on 301 N. Union Ave., Pueblo, CO.

Weekly Gripe: Too much homework