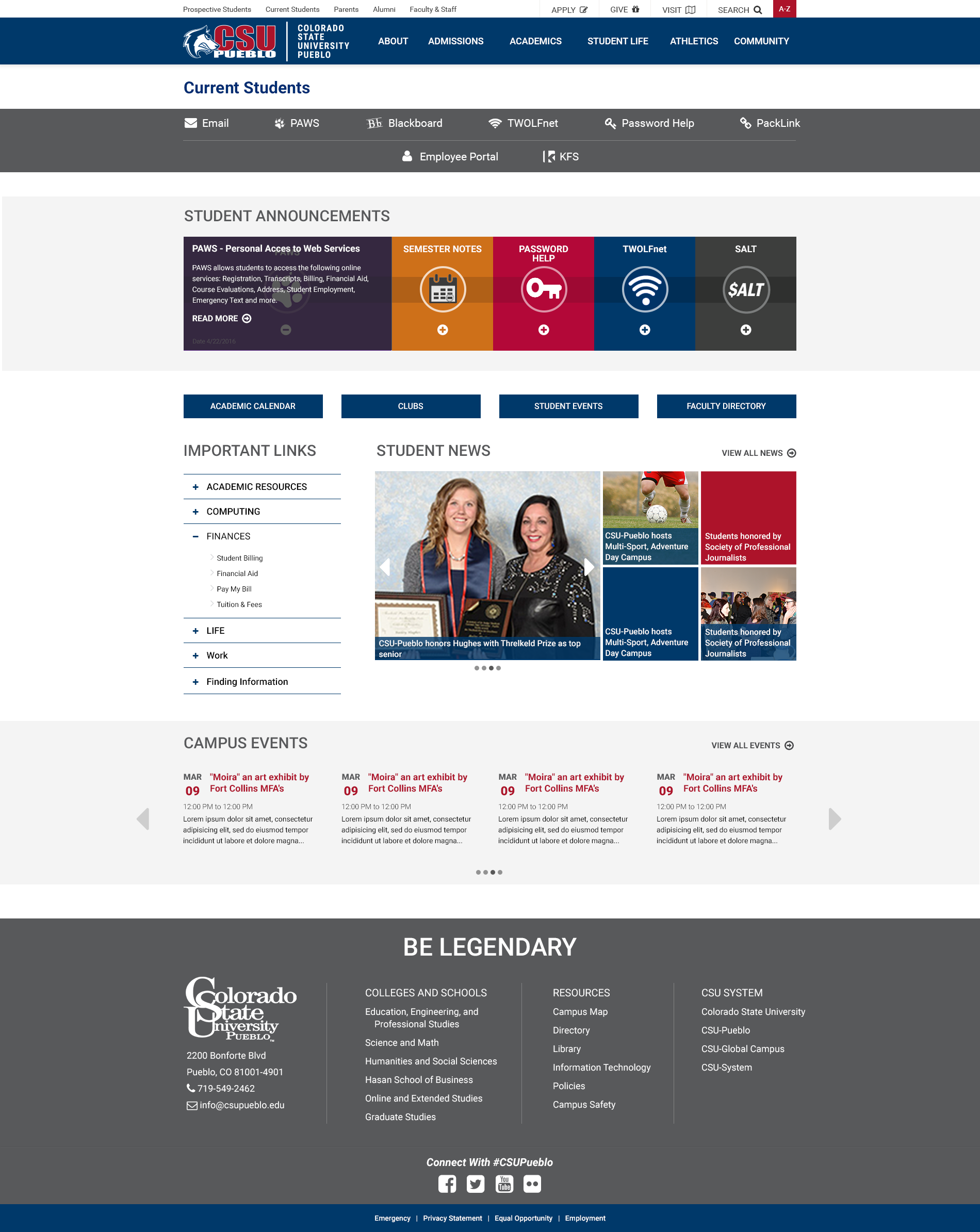 According to research by CSU-Pueblo’s web development team — lead web developer Lallo Vigil and Instructional Technology and Web Development manager Adam Pocius — at least 50 percent or more of users access the site from a mobile device regularly, which is in stark contrast to 2007 when the current website design was completed and launched.

“There is an exponential upswing of technology change and growth around the world right now. We embrace these changes by researching user behavior, seeking feedback, and leveraging new advances to make better tools. The CSU-Pueblo website is no different, and we are excited to implement the new, fully realized design,” said Pocius.

In 2007, smartphones were still a year-in-the-making and users relied on desktop computers for access to the web. Except for content updates and a URL change, the CSU-Pueblo website has remained virtually unchanged since then.

In 2016, smart devices such as smartphones and tablets have become ubiquitous, as students rely on this technology to manage their social, professional and academic lives.

The increased demand for mobile access necessitated the need to update the website. According to Vigil, the re-design has been in development over the past two years and was created using the “Mobile First” method of web design.

“The idea is to use the new design to retain current students and reach out to more prospective students,” Vigil said.

“The site was designed initially with smaller screens in mind, increasing the display size and resolution of the site as we expanded the design. The mobile version also adapts to the main version of the site,” said Pocius.

Whether end users access Blackboard, MS Outlook or PAWS, the TWOLF student portal has been an invaluable and necessary resource for students. All of these functions will remain in the final design but could be found under different names. According to Pocius, the TWOLF student portal itself will be renamed “Current Students” to reflect the content thereof accurately.

The new design is the result of an intricate process. Pocius and Vigil worked with an external vendor, Beacon Technologies, to develop the redesign plan. It was divided into three phases: “Brains, Beauty and Brawn.”

The first phase refers to the way Pocius, Vigil, and Beacon Technologies conducted the necessary research to build the website effectively. A web advisory committee, students, faculty, staff, alumni and focus groups provided Vigil and Pocius with invaluable feedback on the project.

The other two concepts refer to the design of the interface and the implementation of the design into a fully developed site, respectively.

According to Pocius, the site will start migrating content in October, with a soft launch in December 2016 and a full launch in 2017.

Please direct any questions about the web redesign to the web development at webdev@csupueblo.edu.

Nationally-ranked Western State proves too much for CSU-Pueblo