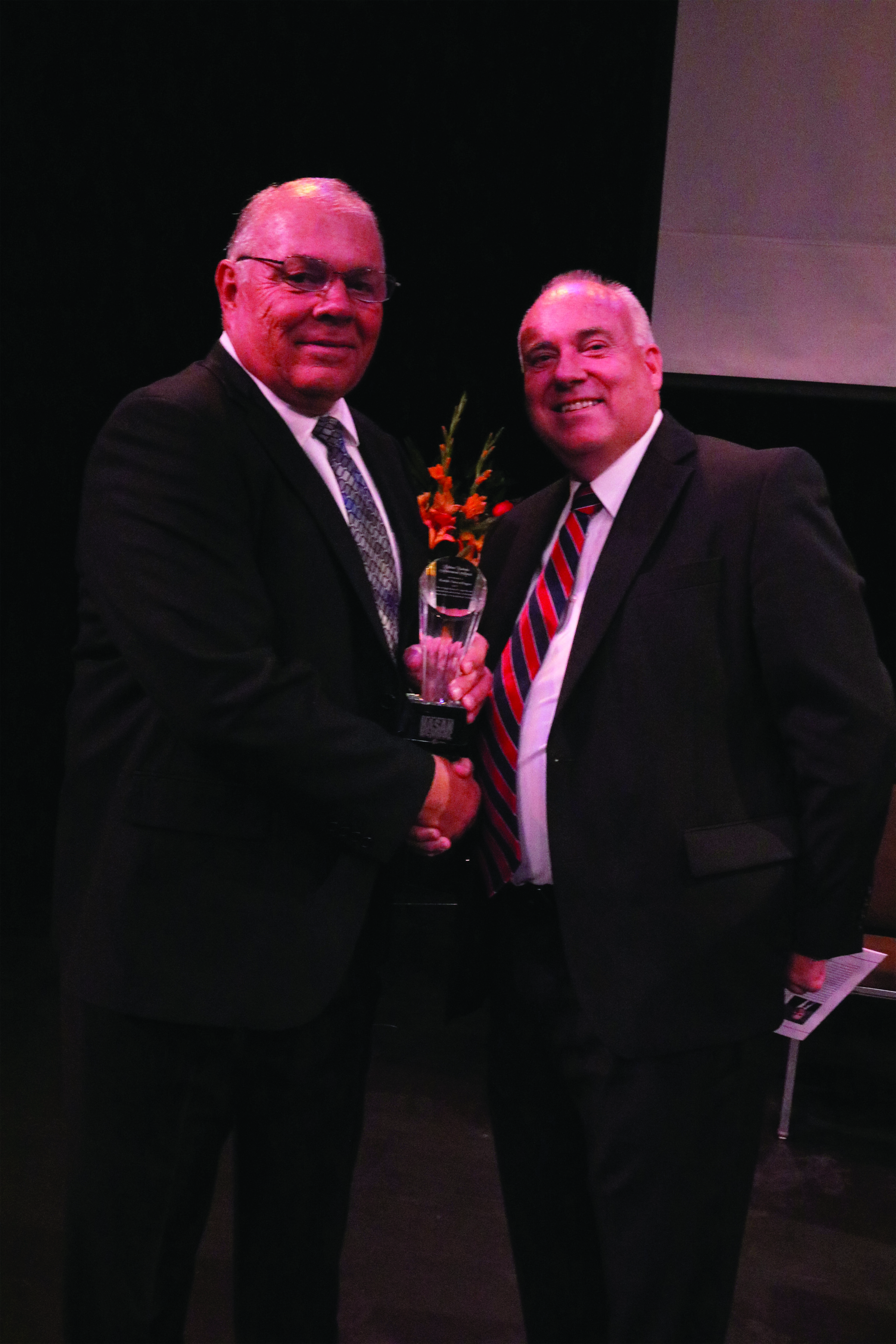 “I spoke to a lot people at the reception tonight,” said Bruce Raymond, Dean of the HSB during his speech at the ceremony. “I have yet to find someone who knows anything negative about Keith.”

The presentation of the award was held Oct. 21 at the Sangre de Cristo Arts Center in downtown Pueblo. Attendees were invited to enjoy a reception with a cash bar before heading over to the Arts Center Theater for a series of short speeches in Swerdfeger’s honor, including a personal thank you from Swerdfeger himself.

“It is a very humbling experience to receive this award,” Swerdfeger said during his acceptance speech. “I was surprised when I first heard that (I was chosen).”

According to a blurb on the back of the event’s program, the Lifetime Business Achievement Award is intended to “recognize individuals with a long career in business success and substantial contributions to the Pueblo business community.”

Swerdfeger’s nomination and eventual selection for the award by the HSB’s Business Council was heavily due to his generosity and willingness to help the CSU-Pueblo campus, particularly the athletics department.

Todd Kelly, President and CEO of the CSU-Pueblo Foundation, said the university asked Swerdfeger for help in the construction of a baseball stadium on campus in 1994. Swerdfeger ended up contributing about $50 thousand worth of cash and other services to the project.

In 2007, CSU-Pueblo athletic director Dan DeRose approached Swerdfeger for assistance with a new project in mind: The construction of a football stadium. “Once again, without hesitation, Keith jumped on board and gave about $100 thousand,” Kelly said.

Since then, Swerdfeger has contributed to the remodeling of the campus’s soccer field. He also donated to CSU-Pueblo’s construction program, the College of Engineering, the HSB, as well as many other contributions to the school.

“That’s just what (Swerdfeger and his wife, Sharon) have done for the school,” Kelly said. “They have done so much for our whole community as well. I’m lucky to have Keith and Sharon in my life.”

Swerdfeger’s daughter, Kym Smith, took the stage to deliver an emotional speech recognizing her father’s achievement. “Tonight, you will hear about our father, the entrepreneur, the civic leader, the community advocate and philanthropist,” she said. “You will hear about how deeply he cares about Pueblo, his employees and his friends. (His) competitive spirit is the thing that’s contributed most to (his) success.”

Michael Salardino, friend to Swerdfeger, spoke about K. R. Swerdfeger’s beginnings as a company. He said the company started with a “secondhand backhoe” and has since grown to employ more than 1,000 people across several states. He said he admired Swerdfeger’s continued work ethic. “He still works with the same mindset as he did with that secondhand backhoe,” he said.

Jerry Thomas, another of Swerdfeger’s friends, could not attend the ceremony and instead recorded a video presentation that was played in the theater. He said Swerdfeger is kind to his employees, an admirable trait.

Pell grant does not need to be repaid, provost says

Be prepared for the next Job Fair