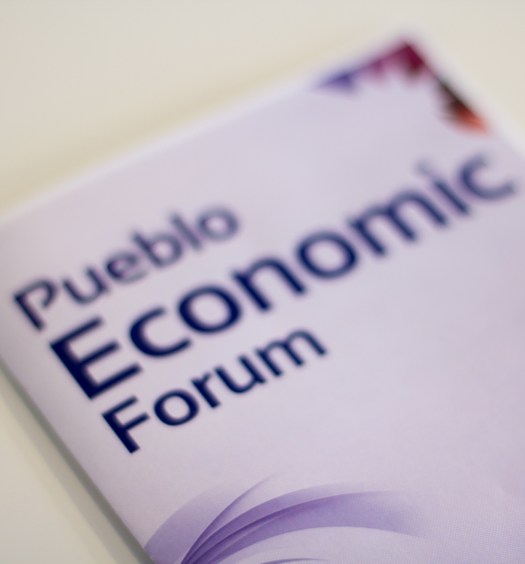 Just like children in school, Pueblo received its own report card last week in the area of economics. Instead of parents gathering to hear the reports, local businessmen and women from multiple different facets like real estate agencies and other businesses attended the Pueblo Economic Forum for 2016.

According to the information presented at the forum, Pueblo is below average in aspects of job growth, median income, quality of labor force crime management, reputation, self-image and test scores in school districts D60 and D70.

Despite ranking below average in these areas, the city does remain above average with the higher educational institutions, Colorado State University-Pueblo and Pueblo Community College, the health care system, low cost of living and arts and quality of life.

The economic forum, which was sponsored by U.S. Bank and CSU -Pueblo’s Malik and Seeme Hasan School of Business, was held Oct. 11 at the Pueblo Union Depot.

The first part of the forum featured Norman Alvis, vice president and senior portfolio manager for U.S. Bank, discussing an overview of economic successes and challenges on a global and national scale and then transitioned to Mike Wakefield, professor of management in the Hasan School of Business at CSU-Pueblo, discussing economic and financial challenges and trends locally.

“There is opportunity in Pueblo, but you have to be willing to go look for it,” Wakefield said.

“We have a great infrastructure and an increasing number of positive activities. It may seem daunting to get involved at first, but be willing to put yourself out a little bit.”

Wakefield explained that Pueblo’s reputation–stemming from the slight increase in violent crimes and articles written reflecting the problems nationally–is a factor that hinders drawing in businesses to come to Pueblo. Additionally, local economic trends not growing as strong or quickly as state levels such as in the job growth sector, also hinder outside businesses from wanting to expand to Pueblo.

“It is difficult to attract businesses and high caliber employers, like faculty, when a quick online search yields unsavory stories about Pueblo’s school district(s) and crime rates,” he said.

Wakefield said another challenge for the local economic improvement had been the local ‘brain drain,’ due to those with with bachelor’s degree or higher education moving away.

Despite those with higher education moving out of Pueblo, there was a slight increase in those with bachelor’s degree education or higher moving to Pueblo from 2015 to 2016. However, this slight improvement was not enough to balance out the overall “brain drain” situation.

He discussed a solution for the brain drain challenge, creating an innovation center that would be located in downtown Pueblo and provide resources and workspaces for entrepreneurial minded individuals and those looking to start up businesses, thereby transforming the “brain drain” to a “brain draw.”

Wakefield’s presentation showed that fostering this kind of institution is something progressive communities like Denver, Fort Collins and Boulder among other cities in the state have done.

The potential for the construction of the innovation center is gaining support from many people both in and out of Pueblo. Additional support for the idea has just recently come into the eye of interest of city council members he explained.

“We face some challenges in the future, and in order to best meet those challenges, we need all functions in our community performing well,” he said.

Wakefield presented other potential solutions to local economic and social challenges at the forum, including tackling crime in a reactive way by increasing the local police force and, in a proactive way, by working with at-risk neighborhoods on a local level.

Additional solutions, such as promoting Pueblo’s positive points and stories in a widespread manner to begin to change its reputation and promote its most appealing points and to create a system of ‘economic gardening’ and fostering the labor force currently in the community while recruiting for the jobs and labor wanted in the future at the same time to transition and enhance the workforce locally, were also discussed.

“We do not have to accept the status quo. We can influence our destiny, but it will require thought, planning and plain hard work,” Wakefield said.

For more information and continually updated figures for both Colorado and Pueblo economies, visit sites.google.com/site/hsbeconomicdata for reference.

Veterans help set up for the Cost of Freedom Tribute