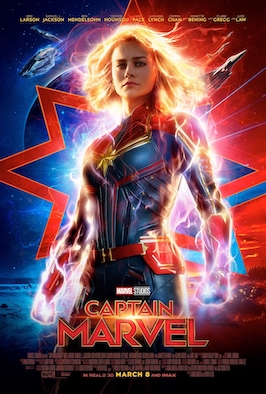 Marvel Studios has released its twenty first movie “Captain Marvel” and has added a lot new elements to the Marvel Cinematic Universe while showing what fans love.  This movie is a prequel to the whole universe set in 1995. The setting leads to many great surprises along with a great nostalgic feel making it like a superhero period piece.

The focus is on how Carol Danvers (Brie Larson) would go on to become Captain Marvel from her childhood to her days in the Air Force.  However, the way the story progresses is not linear.

This aspect of the story also coincides with Nick Fury (Samuel L. Jackson) and his early days working for the top-secret spy organization S.H.I.E.L.D. which has been a part of many MCU movies.  This shows them in their early days and gives some good hints and foreshadowing to future movies in a nice, non–pandering way.

This can be a great way for the die–hard fans of the MCU to fill in the blanks from the movies.  This is also counterbalanced with there being many 1990’s references that mostly feel organic.  These references go from video games like “Street Fighter II” and musical references to Nirvana and No Doubt.

The film follows Captain Marvel’s origin in a fresh way that helps differentiate it from other origin stories.  The story starts with Captain Marvel already having her powers. We learn about her backstory in an order that is splattered but not incoherent.

The film shows different aspects of her character from the powerful superhero she is in the comics to the more vulnerable and human side of her.  She isn’t a character who is emotionless or overly stoic.  Carol Danvers is well rounded and has many intricate aspects to her performance.

The visual effects and action are also top notch. One of Captain Marvel’s superpowers involves photon blasts from her hands along with her flight ability.  In action, these superpowers look stunning and the effects grow more captivating as the movie progresses.

The last major aspect that stands out is the soundtrack of this movie both from licensed songs and its orchestral score.  The licensed songs are cherrypicked from the setting of the 1990s and all fit greatly with some played during fight scenes that fit like a glove.  The orchestral score is also powerful and doesn’t allow itself to be overshadowed by all the other songs either.

Overall “Captain Marvel” is an amazing superhero movie with the benefit of a nostalgic setting.  The film is balanced and topped off with an engaging story and Brie Larson giving a wonderful performance. This movie is without a doubt worth your money.

Rev89 is number one in the nation

New enrollment is up