This is the first time that the club has gone to represent CSU-Pueblo at the conference in recent history.

The biennial conference was a gathering of student and professional historians to present all types of historical research. Each student from CSU-Pueblo’s history club presented their own papers after months of preparation.

According to the Phi Alpha Theta website, “Phi Alpha Theta are a professional society whose mission is to promote the study of history through the encouragement of research, good teaching, publication and the exchange of learning and ideas among historians.”

The club discussed their experience in New Orleans and at the conference, alongside fresh beignets and hot coffee for the audience.

The groups’ agenda was described as jam-packed; many experienced New Orleans firsthand from walking in the French Quarter area, visiting voodoo shops, cemeteries, an aquarium, and a massive interactive World War II museum.

The group said they spent the most time between the conference and the Café du Monde, an iconic café from 1862 known for their beignets, a type of pastry, and their café au lait.

All members said that their time spent on Bourbon Street was a unique cultural experience. History club members got close and personal with the residents’ partying, dancing and performances.

Vice president Teagan Boda said she learned an important lesson when it came to presenting in front of professional historians.

“There will be moments after your panel that you have a question and answer session. During that session, it may go perfectly and you may feel like you’re a genius afterward,” Boda said. “But you may get thrown a curveball question that makes you sit there for five minutes wondering what just happened; it’s all fine, everyone’s been there.”

The history club held dozens of fundraising events to help pay for their trip to New Orleans, Louisiana. They had planned to attend this event since it was announced an entire year ago.

At the event, it was discussed how Phi Alpha Theta History Club earned enough money to pay for their big trip through extensive fundraising.

“We did multiple car washes, we did multiple 50-50 raffles, we gift-wrapped at Barnes and Noble, we sent elegant letters asking for donations to CHASS, the provost and the school president,” Dawn Carter, history club president, said. “We also did two weeks of garage sales, sales from the history club store, and crowdsourcing.”

Carter extended her gratitude toward Dr. Grant Weller, who paid the remaining amount after all the funds were raised.

When it came to fundraising, Boda said it took a lot of hard work and coordination. “The number of times we sat together and got frustrated, thinking we weren’t going to be able to go, was a lot,” Boda said. “We started planning this since they announced it. We were at a club meeting and happened to be on their site. And sure enough, we somehow managed.”

“At the CSU-Pueblo Day of Giving, we earned $1,000, and because we were one of the first ones up, we qualified for the $1,000 matching, which was very helpful,” said Carter. “We worked hard, and our club is amazing.”

Although the floor was open to any history research papers, the group discussed their experience with some presentations in particular.

“When you’re giving a panel, please actually do the research for the topic,” Boda said.

Boda told a story about one panel where someone discussed their research paper based off “Hamilton: The Musical” as their historical source, instead of the actual events that took place. “And when asked questions about Hamilton, not only did she not know the answers, she did not know how to pronounce people’s names,” Boda said. “So do your research so you don’t look like that.”

Carter said she enjoyed her time at the conference and in the city.

“It was amazing. You had student panels, and you had faculty panels, who were presenting all different kinds of research,” said Carter. “I went to a faculty panel and it was just amazing, because they’re professional orators, and they’re masters on their subject.”

Karida Santos, freshman, said she especially enjoyed the panels at the conference. “I was going there as a political science major and when I got back to school, I decided to double major in history because of the trip,” Santos said.

Jasmine Watson, treasurer of History Club, said she learned much from being at the conference.

“I think it was really interesting experience because I had never been to a conference, and then I had to present at one,” Watson said. “It really helped that I was in a group because that made me a lot less nervous, plus we also spent the entire semester practicing for it.”

Watson said she learned several different things from being in the conference and in New Orleans as well.

“We learned a lot about the city specifically, a lot of history. And we learned about Hurricane Katrina and specifically their history, so it made it a lot more personal to experience New Orleans history and then a lot more generalized history was learned during the conference itself,” Watson said.

Englehart said she faced issues when it came to technology during her presentation, but resolved it quickly with the help of faculty adviser Judy Gaughan by printing out her presentation.

Jackie Stroud, history department lecturer, praised the club for their representation at the conference and said that the group gained experience and confidence with conference presentations in front of a professional audience.

“Professional historians are always going to pick a town that’s a historic place because it has to be a combination of scholarship and being there,” Stroud said. “For New Orleans, I can’t think of a better place to go experience for your first time.” 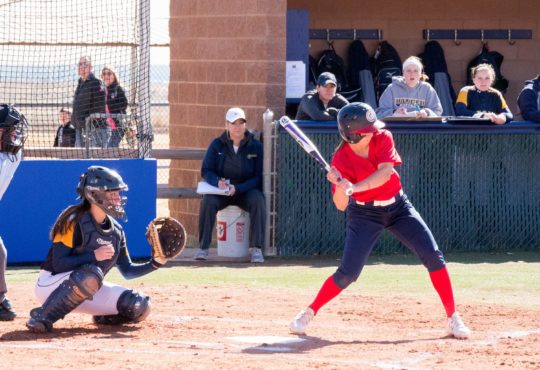 Softball finishes pod series with one win and one loss

Chacon is remembered for caring for students

President meets with students for breakfast

University to partner with Marketing Club to send students abroad