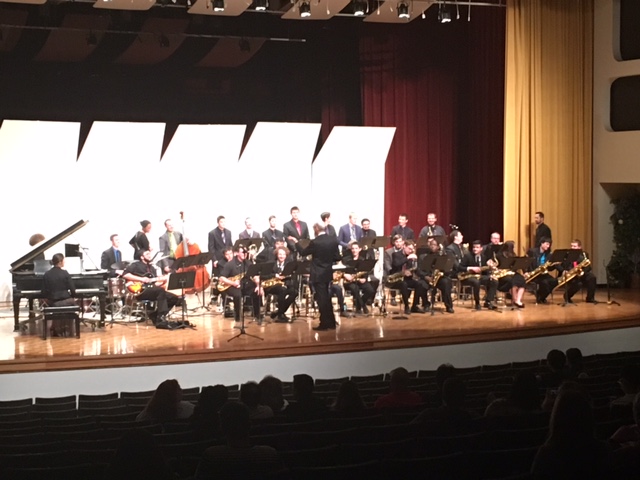 Music majors at Colorado State University-Pueblo and Fort Collins know how to collaborate. On March 8, students in the Jazz Ensemble 1 of each university performed in a Combined Jazz Concert in Hoag Recital Hall.

Although the concert started at 7:30, many people could be seen joining the audience throughout the performance. The audience was casual and respectful of the performers. They showed support for the students by a short applause after each solo.

According to the concert program, CSU-Pueblo played songs composed by Grammy winner Gordon Goodwin and composer Sammy Nestico. They featured the vocals of Ryan Walters, a junior music education major with a double instrument major in vocals and saxophone during their performance of “Caught a Touch of Your Love” which, according to the program is by James Best, Craig Bickhardt and Jack Keller.

CSU-Ft. Collins took a different approach to their performance by featuring Gary Smulyan who is a professional baritone saxophone player, according to the program. Smulyan was featured in four of the six songs CSU-Ft. Collins performed. He joined the ensemble during the performance of “Just You, Just Me” by Jesse Greer and arranged by Paul McKee.

For the final performance, the sister schools shared the stage. The universities demonstrated friendly competition by choosing a song that featured solos for multiple instruments and dividing them seemingly equally between the two ensembles.

Makenna Green, a sophomore music performance major said, “It was a super cool experience.” As a member of CSU-Pueblo’s Jazz Ensemble 1 who performed that night, Green said it seemed that the students were mostly laughing with each other on stage and “having lots of fun.”

Both ensembles together took up the entire stage. In fact, Green described the experience as “massive.” Peter Sommer, the director of the CSU-Ft. Collins Jazz Ensemble joked that the size of the group made them “almost the most jazz thing” the audience would see that night.

The Dark Knight rises to the occasion