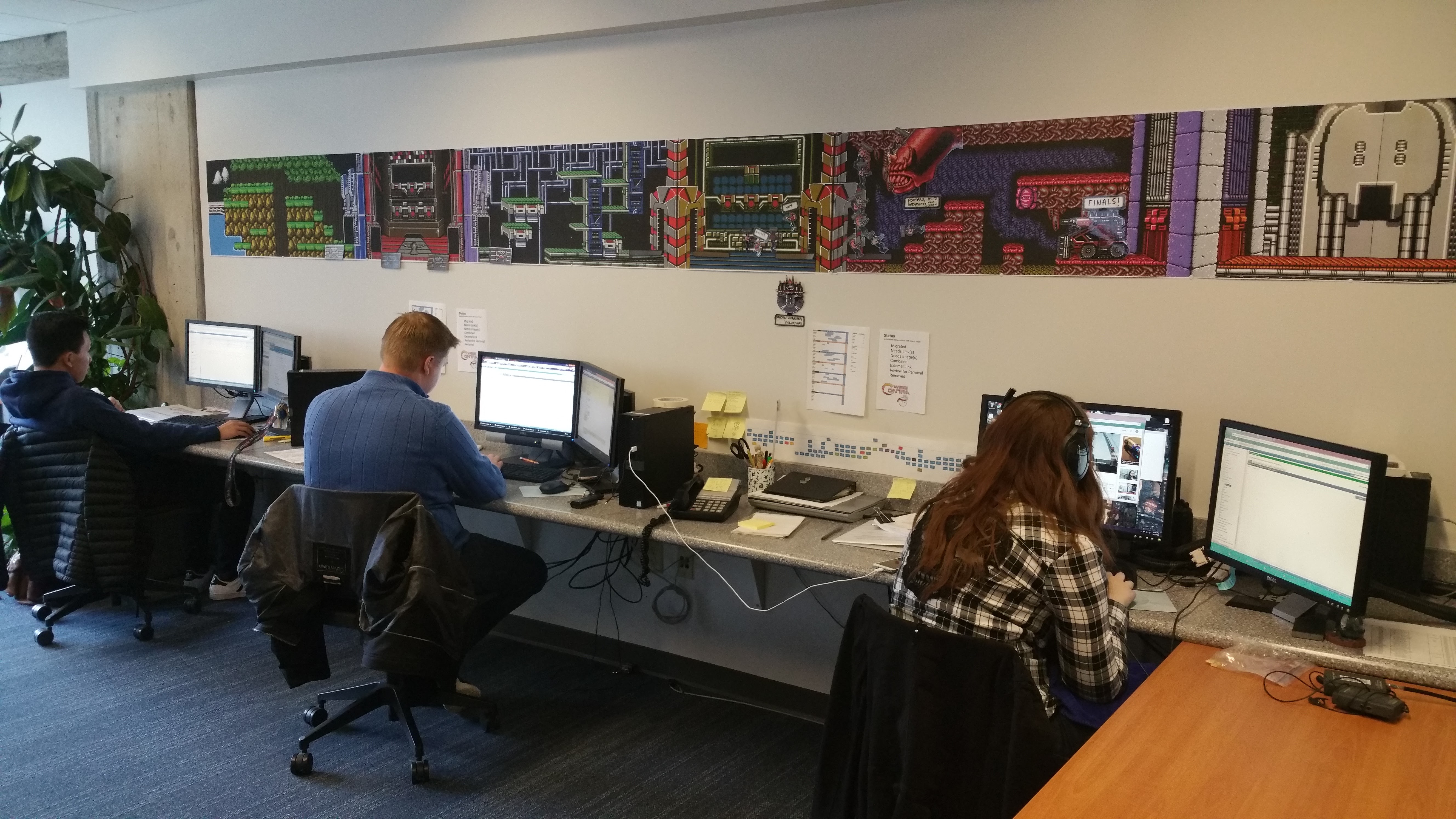 Colorado State University-Pueblo launched a re-designed website in Dec. 2016. The heavy concentration and use of mobile devices, combined with an outdated interface led CSU-Pueblo to consider a website re-design. Web Development and Instructional Technology Manager Adam Pocius, is pleased with the successful launch of the new site.

“It was a champagne moment for sure,” Pocius said, “We had a great team take us there and now we are transitioning into taking the project completion momentum and transform it into maintaining and enhancing the web experience going forward.”

In 2016, Pocius and Website Developer Lallo Vigil set up a team of work study students to assist them with the extensive project. Pocius used images from the 1987 Nintendo game, “Contra” as progress markers for the project.

The success of the launch is due in no small part to the excellent support the Web Development Team received throughout the project. In addition to several Work Study students helping with the transition, both CSU-Pueblo president Lesley DiMare and CSU-Pueblo Foundation CEO Todd Kelly believed in the team’s ability to see the project through. Pocius said students, faculty, staff, the web advisory committee and outside company Beacon Technologies were all integral to the success of the project.

Pocius said the biggest difference from the old site is CURRENT STUDENTS. CURRENT STUDENTS replaced the previous TWOLF STUDENT PORTAL with the new site launch. Everything a student needs – e-mail, PAWS, Blackboard and more – are all conveniently located in one, easily accessible area. There is also a search feature that allows quick access to information a student may need.

“The two key areas are CURRENT STUDENTS at the top of the site and the STUDENT LIFE button. This will get most students to the resources they need. If all else fails, SEARCH is working beautifully across the site,” Pocius said.

Among the features of the website, Pocius is enthusiastic about a widget in the upper-right corner of the site on most pages, which acts as a portal to the CSU-Pueblo Experience and is updated every other day with news and events that affect CSU-Pueblo.  He is also partial to the subtle lightning bolt background he designed of the site. Pocius said this can be seen in areas where there are red backgrounds on the page.

Mass Communications student Zahria Rogers likes the site, but has some concerns about using it on campus. She has no trouble loading it on her phone, but when she tries to access it from her computer using CSU-Pueblo’s Wi-Fi, she said the desktop version of the site tends to time out. However, the site is designed and optimized for mobile use, Pocius said in an interview from 2016. At the time of that interview, Pocius also said at least 50 percent or more of users access the site from a mobile device regularly.

Students like Johnea Jacobs are more familiar with the previous version of the website and is somewhat resistant to the change. Jacobs said she finds the new site harder to navigate, but likes the design.

“It looks good,” Groves said, “From what I saw, it looks easy to use.”

Groves plans to attend CSU-Pueblo after she obtains her Associate’s Degree and prefers to do most of her college work online. She believes the new design will help her be admitted and enroll when the time comes and will adjusting to CSU-Pueblo easier on her.

Now that the website has launched, Pocius and his team are in full maintenance mode and will be constantly updating and improving functionality of the site. The site may take some getting used to for older students, but for newer students, it offers a simpler interface, with a little bit of humanity thrown into the mix. The experience is designed for ease of use and is quite an accomplishment for Pocius and his team.

“The culmination of text and multimedia can become a website. Adding humanity transforms it into an experience,” Pocius said.

For more information about the evolution of the new website, the CSU-Pueblo Today provided extensive coverage during the Fall 2016 semester here: http://csupueblotoday.com/top-story/highly-anticipated-csu-pueblo-website-redesign-nears-implementation and in the Fall 2016 issue of the “CSU-Pueblo Today Magazine.” Check out the new website here: https://www.csupueblo.edu/.

Various choices to eat near campus