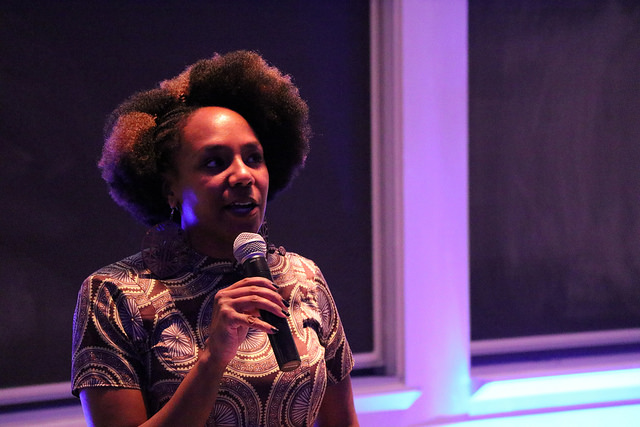 On January 31, Bree Newsome presented at Colorado State University-Pueblo campus as a part of the distinguished speaker series. This series consists of speakers from a wide variety of talents and professions, and are all free for the students and public’s to enjoy.

Newsome is known by her civil works of social justice. Her most recognized act comes from her scaling the flag pole at the South Carolina State House to bring down the confederate flag that was previously flying. Her passion for social issues is clear in her work, and was shown in her presentation on Tuesday evening.

She began the evening by asking for a moment of silence for all of those who have lost their lives recently and in the past to hate crimes and other injustices. This set the tone of the room as one of solidarity, and all eyes were on Newsome as she began speaking of her own story.

She went on to explain how many members of her family had been victims of hate crime. Growing up she understood the value of courage, and why she needed to be courageous for those that couldn’t.

Her moment to act came on that day in South Carolina. She had previously been watching the memorial service for those who had been shot in the South Carolina church, and couldn’t help but to notice the confederate flag still flying at the statehouse behind them.

To her, and many Americans, the confederate flag simply stood for intolerance, racism, and white supremacy. Her words were “I felt so strongly about how intolerable it was that they still allowed this flag to fly.”

That in mind, she decided to take matters in to her own hands. With help from supporters, Newsome could climb over the fence surrounding the flag poles, and scale to the top.

As she removed the flag and was heading back down, police officers surrounded her and threatened to use a stun gun on her. Being that she was on a metal flag pole, that meant there was a good chance of electrocution. Fortunately, her fellow supporters stood up and held on to her saying “if you are going to tase her, you will tase all of us as well.” The police officers stood aside, and Newsome could step down.

In that moment, Newsome stated that “we had been waiting for South Carolina to do the right thing for over 100 years.”

In her speech, she said how important it is to act on what you believe in, even if you feel as if individually you won’t make a huge impact. She stated “It is important to understand a movement is millions of people doing millions of things at the same time.”

Ettleman said “Bree Newsome is a powerful public figure and I think she has the ability to educate out students and initiate new movements for us to get behind.