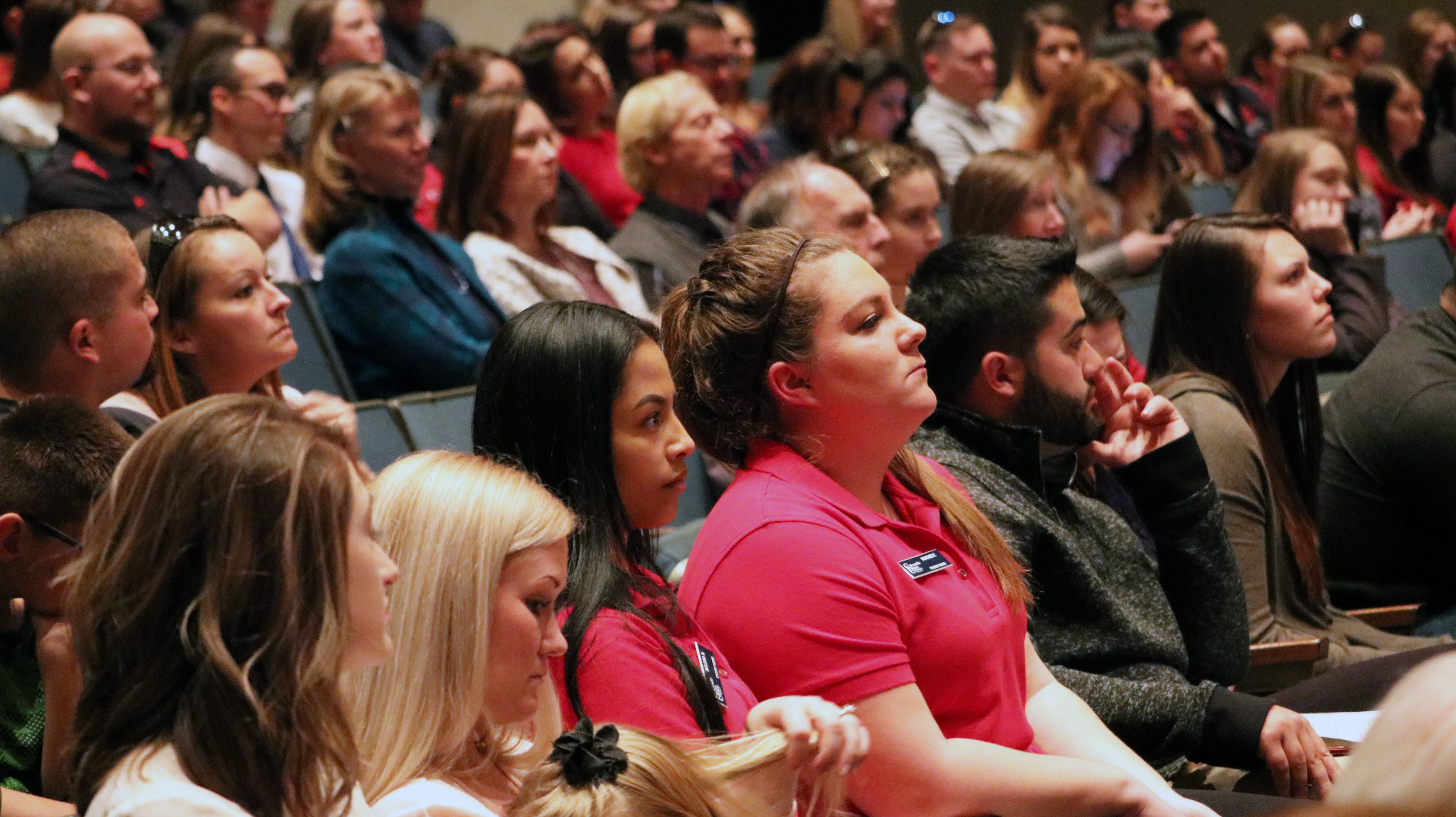 Photo by Devin Cobb The audience of the CSU-Pueblo Nursing Convocation.
3.6kviews
0shares

The Nursing Convocation was a formal introductory ceremony to welcome the newest class members to the official nursing program at CSU-Pueblo and to inspire continuing and graduate students for their future careers in the expanding health care industry.

The event began with a brief introductory speech from Ashley Jones, a Senior Nursing student and President of the Southern Colorado Association of Nursing Students. Jones welcomed students and their families in attendance, followed by a brief performance by the CSU-Pueblo cheerleaders to rally school spirit from the crowd.

Ashley Jones said she hopes to leave a legacy in the nursing department when she joined SCANS two years ago. Jones and her nursing peer created a mentorship program last year to “provide a connection between a sophomore and a junior student.”

“We hope that this program will not only provide an academic connection between students, but also create an environment of caring and connection throughout the entire department,” said Jones.

Established in 1964 and formally known as the department of nursing, CSU-Pueblo’s School of Nursing has had significant impact on the city of Pueblo.

The School of Nursing has been around for 54 years and plays an integral part of training student nurses and directly helping the community of Pueblo, according to Dr. Bruce Raymond, Interim Provost of CSU-Pueblo. It is the school’s anniversary since becoming the official School of Nursing last year Jan. 19.

Raymond indicated the greater need of each student nurse in the program. “The National League of Nursing estimates in 2018 alone, there would be a shortage of 7,000 registered nurses in the state of Colorado,” Raymond said.

Supporters of the event included Centura Health, Colorado Department of Corrections, Parkview Medical Center, Sigma Theta Tau Iota Pi Chapter, and more, some of which hosted small table booths before the event for students to interact with.

Dr. Sylvester A. Kalevela, Dean of the College of Education, Engineering and Professional Studies, supplied life-long advice for the nursing student body. Kalevela said, “anything worth doing is worth doing well.”

Keynote speaker Dr. Wanona Fritz, with a highly decorated  and significant nursing career spanning over 50 years, spoke highly and honestly of the nursing profession in her presentation, “Envisioning Your Future.”

Her speech highlighted the importance of each student nurses’ dedication to their career and provided thorough life stories and experiences to document her experiences. Her presentation covered topics from the history of nursing, to international relations, big data, and the driving forces of the health care industry from 2010 onward.

After being told she was not college material by her college I, Fritz had a successful nursing career in the military and around the world from Vietnam, Jordan and the United States, offering life advice to the audience. Fritz said, “go where there is no path and leave a trail.”

Fritz was presented with an award of recognition by Dawn O’ Keefe, Graduate Student in Psychiatric Mental-health nurse Practitioner and Associated Student Government Representative, for her decorated history and dedication of work to nursing and the health care industry across the world.

Dr. Joe Franta, Associate Dean of Nursing at CSU-Pueblo, revealed that the department was in the final stages for approval of the doctorate of the nursing practice for the fall of 2018. Franta said that there were even more developments coming for the School of Nursing.

“Thanks to the support of Parkview medical center, the CSU Chancellor and the CSU President, we have received approximately $1.4 million for three years… to increase the undergraduate program and start the doctorate nursing practice,” Franta said.

The school plans to increase admission sizes into the nursing program according to Franta. “We will increase our admissions by another 10 students next year to bring that annual undergraduate admissions to 130, a 30 percent increase overall,” Franta said.

“This year, our plan is to admit 120 undergraduate students to the basic and accelerated programs, where two years ago,” Franta said. “We were admitting 90 students.”

Franta continued to reveal more on the future of the Nursing program, stating that they are in the final stages of approval with the doctorate nursing practice; he estimates that it would be finalized by summer for fall 2018. “At capacity the graduate program will increase from 80 students to 160 students,” Franta said.

The accelerated growth and student success in class and field work are results of the hard work students and faculty have been dedicating to the nursing program since 1964.

Carisa Medina, a Junior Nursing Student at CSU-Pueblo, spoke highly of her experiences in the nursing program. Medina said the program was is a really great experience where she is able to learn a lot about nursing opportunities through supportive peers and faculty members.

“Through being in the program, you definitely learn to network yourself,” Medina said. Medina is completing her education at CSU-Pueblo alongside a field externship with Parkview Medical Center.

In response to the hypothetical potential of the School of Nursing being expanded in the future past the halls of the Technology Building, Medina said she hopes for the same level of expansion as the Hassan School of Business to handle a potentially large influx of students as the Nursing program grows.

Trish Mathis, a Senior SCANS faculty representative, wishes to see the new class of nursing students at CSU-Pueblo lessen their anxieties about the program and realize the opportunities each student has to get the help they need to succeed. “Be passionate about what you do and you’ll be successful,” Mathis said.

The convocation ended with a short student-produced parody music video about thanking your nurse and the overdramatized lives of nurses in hospitals, which drew much amusement from students and their families in the crowd.