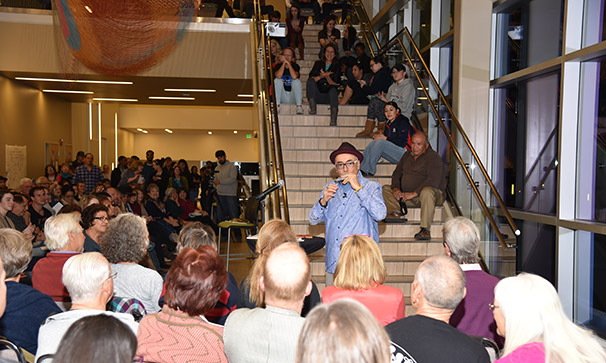 On Tuesday evening, U.S. Poet Laureate Juan Felipe Herrera visited Colorado State University-Pueblo to read some of his poetry and tell a little of his life story.

Herrera, the first Hispanic poet laureate, has written about 30 books, with topics in his poems ranging from peace between different races to political issues.

“I went places, and I heard stories,” Herrera said. “Nobody taught me to write poetry.”

Herrera stressed that he cared about all people and wanted everyone to be safe.

“I’m not paying attention to whether they have a police uniform or not,” Herrera said.

Juan Morales, associate professor of English at CSU-Pueblo, helped organize the event with Maria Kelson of Pueblo Community College, spoke before introducing Herrera at the event. His first words were “I’m nervous.”

After getting out his jitters, he expressed the joy he felt with having Herrera there.

“One of the most exciting parts of my job is being able to introduce students to writers. I went through college thinking that all of the poets were dead,” said Morales.

In a later conversation, Morales explained that he views himself as an “ambassador for poetry.” He wants to raise awareness that the SoCo reading series is here, and people can come to hear poetry.

“This kind of has inspired us to say ‘who else can we get that’s really famous?’ I think we’ve shown that we’re up to the challenge,” said Morales.

Morales, Gregory Howell from the Kadoya art gallery, and professor Maria Kelson of PCC have been planning this since last February.

“It was a lot of work and a lot of persistence,” said Morales.

After he had finished reading from some of his personal books and a wrinkly piece of printer paper, Herrera signed copies of his work and took questions. He didn’t want to comment on the election at the time.

Students at the event came in support of the messages that Herrera had. CSU student Selesi Afuhaamago seemed especially interested in his political messages.

“It’s cool; I hope he writes a Trump satire,” Afuhaamago said. He had heard about Herrera coming to the school after reading some of his poems in Dr. Montoya’s class.

“Songs of Our Families” is a Testament to Harmony