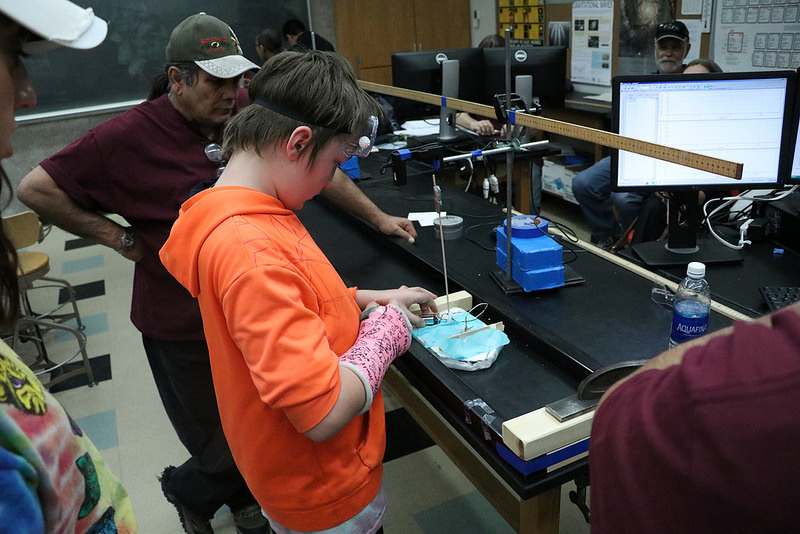 Colorado State University-Pueblo hosted 900 students from around Colorado to compete in 35 STEM based competitions on March 4, .

This event began at 9 a.m. and ended at 4 p.m. The CSU-Pueblo science department hosted both high school and middle school students to participate in science a competition that has 35 different categories for students to participate in. There are 60 teams of up to 20 students. Acacia Dettman, junior at CSU-Pueblo, said, “I think it is really cool, the students participating in this event are actually trying to do good and win for their school, which shows a genuine interest in the STEM based field and we always need more young people to peruse the science field.”

The competition is STEM based which is an acronym for science, technology, engineering and math. The event had roughly 150 volunteers that worked the different sections of the competition. These volunteers include students and staff of CSU-Pueblo.

Many community and state governmental agencies also sent volunteers, including the Pueblo City County Health Department, the National Weather Service, TTCI, Vestas, UTC Aerospace, United States Geological Survey and the U.S. Air Force Academy. Nearly 100 upper division CSU-Pueblo students and their faculty served as judges for the various events as well. The teachers who participated in this event created the evaluation material the students were tested on. Professor Matthew Cranswick, one of the science professors at CSU-Pueblo, said, “After creating the material the students are evaluated on, it is nice to see all the young students willing to work hard in a science field and show their interest.

Abby Davison put the event together. Davison is the Director of the Science Learning Center. The SLC is also STEM based, that is the reason that Davison directed the science olympiad competition. Davison said, “I believe this is important on many levels to demonstrate the dedication of CSU-Pueblo for higher STEM based learning, it also gives the CSU-Pueblo students an opportunity to be role models for the younger students with similar interests.”

An awards ceremony followed the competition and was held at Pueblo Centennial High School from 4p.m. until 5:30p.m. at the ceremony there was a closing statement given then the results of the overall event were given. The top 15 schools in both division B and C, which is middle school and high school, will advance to the state competition at the Colorado School of Mines on April 15th.

“I worked at the Rube Goldberg machine station and when we had just started judging the children’s contraptions, I accidentally bumped into one and activated the entire series that had taken that child about 20 minutes to set up, after that the whole room glared at me and I’m sure they all hated me as he reset his entire machine. I got off to a rough start but overall it was a wonderful experience to see these intricate and elaborate machines that the children had been building for months.” Annie Mehl, junior at CSU-Pueblo, said.