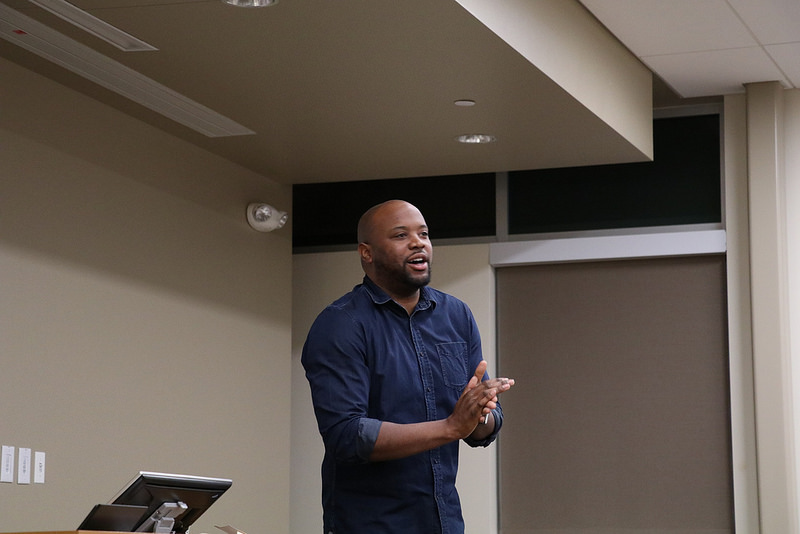 The event was organized by Juan Morales, associate professor of English and the director of creative writing who partnered with the Black Student Union (BSU) and the English Club. The SOCO Reading Series has brought Goodwin to CSU-Pueblo in the past. In fact, Morales said, “We’ve known each other for several years now.”

Roderick Reed, a business major with a marketing emphasis and BSU event coordinator helped Morales as part of the student organization’s support of Black History Month events. He commended Goodwin saying, “(Goodwin is) a very knowledgeable person that’s able to put that in art.”

Seven students took advantage of the poetry slam sign-up which took place before the two featured presenters. Morales called them “brave souls” and asked that the audience give them encouragement and support. The students who presented were both veterans and novices to the experience. Some performers read from papers while others had their pieces memorized. Morales did comment on the use of profanity after one piece, he seemed neutral about it saying, “Language takes us where we want to go.”

There was no formal protocol for how the audience reacted to the performances with both applause and snaps could be heard. Morales joked about the inconsistency in the audience, he said, “I left my script in the car.”

After the open-mic performers, Goodwin and Wilkinson were introduced by Morales. It was also mentioned that limited editions of Goodwin and Wilkinson’s chapbook, Inauguration were being sold. Morales said, “It’s still warm,” in reference to how new the publication was.

Inauguration is a collection of poems that highlight current events from, as Goodwin put it, their “specific lens.” Goodwin and Wilkinson have known each other since Wilkinson was a student. She commented on her partnership with Goodwin saying, “It was such an honor to be able to work with someone that mentored me.” According to his website, Goodwin currently teaches in the Department of Theater and Dance at Colorado College.

The poets from Colorado Springs were enthusiastic about sharing their pieces; Goodwin said he was “really excited about this new endeavor.” He went on to encourage students to enroll in English classes saying, “Everyone in college should be in a writing course.”

Goodwin also expressed excitement about sharing his work with Pueblo and “bridging the gap” between Pueblo and Colorado Springs. Goodwin said, “You guys have been a tremendous audience, as I knew you would be.”

In fact, more people continued to join the initial audience throughout the poetry slam portion of the night. By the end of the event, Reed suspected there were approximately 65-70 people in attendance. “This was way more than what’s happened in previous years,” said Reed.

Morales was also surprised at the turn out and the inclusion of community members, such as a representative from La Casita Grande Editores. According to their website, http://www.lcgeditores.com, La Casita Grande Editores is a publishing house whose main purpose is to “fill a void” in Latino and Caribbean literature. Morales said, “The outcome was unexpected. I didn’t envision people from the community.”