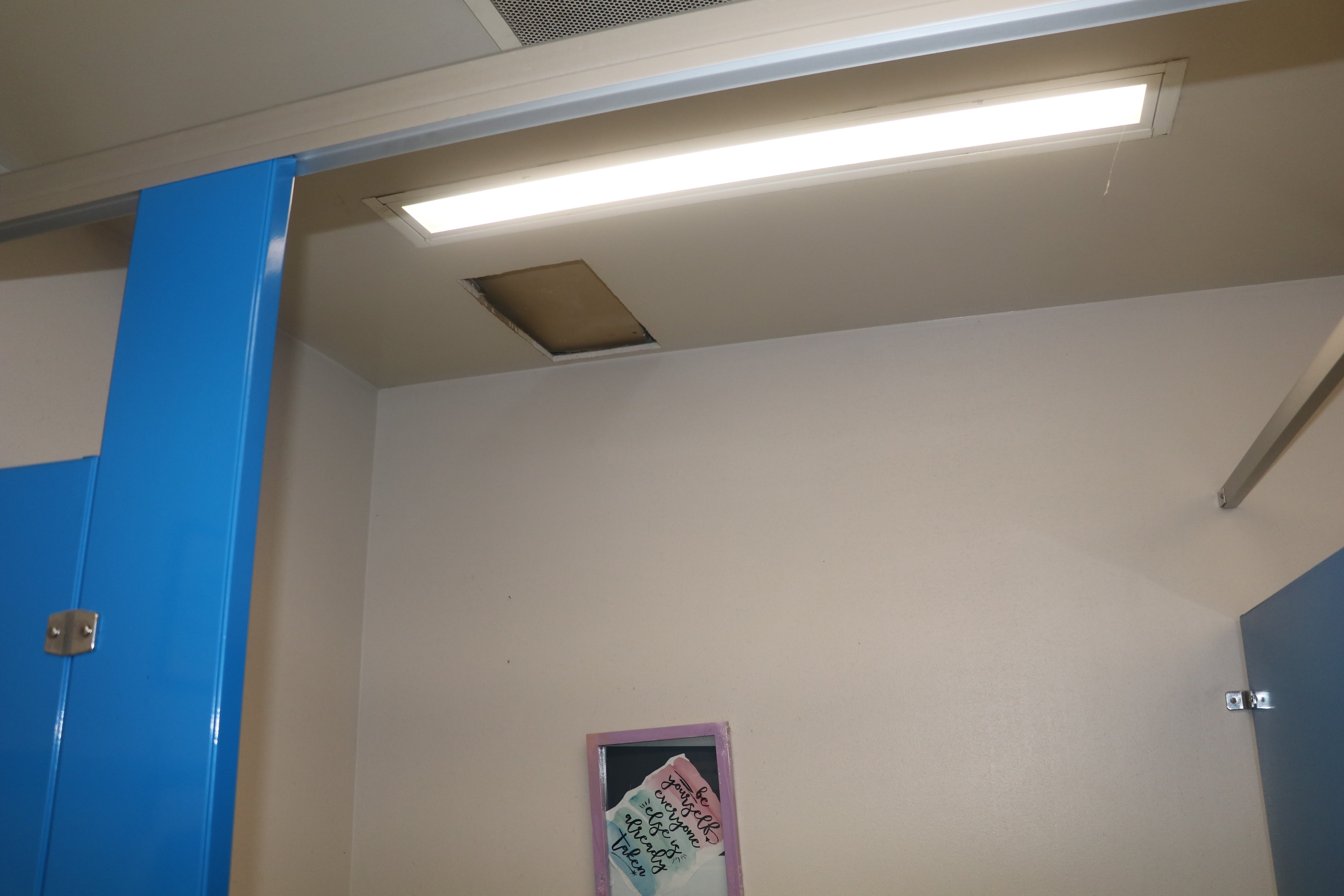 CSU-Pueblo Today Photo/ Yenifer Calcano In the women's disability cubicle in the technology building there is missing piece of the roof.
5kviews
0shares

Although Colorado State University-Pueblo has undergone a massive facelift in the past decade alone, a lingering zit remains with the status of public campus bathrooms.

With over 4,000 undergraduate students in attendance across a 275-acre campus, according to the CSU-Pueblo website, the university is faced with the task of providing appropriate and accessible bathroom facilities to all students, staff and faculty.

From missing sanitary container bags to faulty locks and cramped spaces, campus bathrooms have inconvenienced students and staff at CSU-Pueblo. While some bathrooms are designed toward environmental sustainability with hand dryers for zero paper waste, other bathrooms seem stuck in the past.

Daniel Conroy, CSU-Pueblo student, said he spent much of his time in the Chemistry building, and saw potential issues dealing with the bathrooms there.

“If you’re differently abled, then it might be more difficult to use the restroom in the chemistry building,” Conroy said.

While many students find themselves running into inconveniences in campus bathrooms, bigger issues are revealed with accessibility for differently abled students.

“It is something I have learned to adapt to. I am a person with a disability, but I don’t live in a disabled world,” Tomlinson said. “And what I mean by that is that I don’t expect the world to cater to me. But at the same time, it is difficult. I am very blessed to have the mobility that I do have. Some individuals have even less mobility than I have.”

Tomlinson said that others who use a different type of mobility aid unlike her own might face more challenges with campus bathrooms.

“I’m always appreciative of people who see my circumstance and help but with something as sensitive as going to the bathroom, it’s kind of like, thank you for your help, but I’d rather you not,” Tomlinson said.

In regards to specific problems, Tomlinson said that while some doors are tricky to go through, it could be helped by an additional push plate tool, similar to the ones outside of main doors.

“Something that makes it more challenging is that there are no handicap push plates on those entrance bathroom doors in the first floor of the LARC,” said Tomlinson. “So for me, I’m going forward on the scooter with one hand and holding the door with the other and trying not to clip the door and the scooter; it is frustrating some times.”

Tomlinson said she believes the university does a good job of being responsive and understanding student needs. “They just might not know everyone’s needs; I don’t expect all of the bathrooms to be up to code, because that’s just not a realistic expectation,” Tomlinson said.

Not all disabilities are visible. Different students will find different issues when facing the seemingly basic task of going to the bathroom. If facilities fail to adopt ADA standards, schools like CSU-Pueblo could potentially isolate students from basic sanitary rights.

Although many buildings on campus have bathrooms that meet the standard for ADA requirements, some find that it simply isn’t enough to meet the real requirements of differently-abled bodies.

Signed under former president George H.W. Bush in July 1990, The Americans with Disabilities Act was a civil rights legislation that prohibited unfair discrimination against people with disabilities and guaranteed equal opportunity in the U.S.

Within in this act was Title III, a comprehensive explanation of public accommodations and commercial facilities that all public facilities have to abide by. If a building was constructed before the act was officially in place, Title III reinforced that these public facilities still had to be modified to be ADA compliant.

While the newer buildings such as the General Classroom Building and Occhiato Student Center are up-to-date on standard ADA compliant bathroom architecture, some of the older buildings on campus appear to be lacking in that facet.

The ADA code, while very in-depth and complicated, has direct rules for applying ADA compliances to certain places that fall under required categories, still has many clauses and fine prints that make things complicated.

According to Title III of the ADA, all new construction after the effective date of the ADA, approximately July 1992, must be fully compliant with the Americans With Disabilities Act Accessibility Guidelines found in the Code of Federal Regulations at 28 C.F.R Par 36 Appendix A.

Additionally, Title III “prohibits discrimination on the basis of disability in the activities of places of public accommodations businesses that are generally open to the public and that fall into one of 12 categories listed in the ADA.” Education facilities, such as CSU-Pueblo and Pueblo Community College fall under the 12 categories listed in the ADA.

Every city follows a different jurisdiction when it comes to structural codes, but they all remain similar in the process. For example, if a company is in the Pueblo region and they are not a state-run or state-owned facility, they must follow the Pueblo Regional Building Code.

Being that the university is a state facility, CSU-Pueblo does meet the requirements dealing with ADA compliant architecture within all the buildings. Yet, meeting the minimum requirement does not mean complete and convenient access for every single bathroom. For places like the psychology building, bathrooms might just be due for a renovation.

Other students and faculty have found bathroom issues in the school’s representative building, the Buell Communications Center, also the hub for the Visitor’s Center.

Katherine Howard, REV 89 DJ, said she had various issues when it came to the Buell Communication Center bathrooms.

“I can’t account for the status of the men’s restroom, but I would say that the women’s restroom in the BCC is in due of an update,” Howard said. She mentioned issues pertaining to the faulty locking mechanisms on stalls and the lingering sewer smell.

Lacy Page, REV 89 DJ, said she felt uncomfortable with the faulty locks on stalls, fearing that another person might walk-in on her privacy. “To me, the bathroom always smells like it’s got a gas leak,” Page said.

Mattie Ross, assistant director of admissions, said that she also came across problems with the BCC bathrooms. According to Ross, she hasn’t had issues in any other campus bathrooms except for the BCC/Visitor’s Center bathrooms.

“If you go in there, it smells like natural gas,” Ross said. “It smelled off, but I didn’t know what it quite was until a student reminded me what it smelled like. We’ve contacted facilities before about that, but I don’t know if anything’s happened in that regard. I don’t know what’s going on with the natural gas smell though, it permeates the air. I don’t know why it’s happening.”

Ross said that while other issues involving toilets, sinks and water quality have occurred in the past in the BCC, the issues were resolved by Facilities Management. “With that, it was fixed pretty quickly, so it seems a lot of the things that are dire to the visitor experience are fixed quickly,” Ross said.

Ross said that the Visitor’s Center is very important to both students and the whole school.

“Every year, we’re trying to enroll the next class, and the Visitor’s Center is how we present ourselves to our guests,” Ross said. “We want it to be welcoming, clean and lively; I think it’s something that’s always on my mind, to improve and make better.”

In an email interview, Brooklyn Salisbury, senior, said that she has had problems with the bathrooms on campus, but finds more issue with others not using courteous behaviors in regards to handicap bathrooms.

“I’ve only had a problem in the psychology building; I’ve only used the bathroom on the second floor in the main hall,” Salisbury said. “The handicap stall is right by the door, so I often block the entry when I’m waiting for a person to come out of the stall.”

Application of the ADA code becomes complicated when dealing with “readily achievable” standards for different sized businesses in 42 U.South Carolina §§ 12181–12189/ Title 42 of the United States Code. The psychology building falls under this aspect due to its older age.

According to the U.S.C, this means that even facilities that have not been modified or altered in any way after the ADA was passed still have obligations. “The standard is whether “removing barriers,” typically defined as bringing a condition into compliance with the ADAAG, is “readily achievable,” defined as ‘…easily accomplished without much difficulty or expense.’”

Salisbury said the biggest issue she had was less of an architecture problem, and more of a people problem.

Salisbury said she would like to see bathrooms reconfigured in such a way to always have the handicap stall at the very end of the bathroom.

“This way, I won’t be blocking other students trying to navigate the proverbial “water closet,” said Salisbury. “I’d also like to see the soap dispensers stocked more efficiently. It seems as if there’s never enough soap in the bathrooms.”

Although Salisbury noted that there were some issues, she said she was thankful for the help students and staff provide at CSU-Pueblo.

Salisbury said she has noticed CSU-Pueblo’s efforts to make the campus more accessible, especially in certain areas. “Also, I want to say thank you to everyone who opens doors for me; the students on campus are so kind and accommodating,” Salisbury said. “I also love our handicap resource center. We truly have a great staff at CSU-Pueblo.”

Joshua Ernst, Title IX and ADA/504 Coordinator of the Office of Institutional Equity, said they are currently in the process of evaluating where issues and pain points are on campus regarding accessibility issues inside facilities. According to Ernst, the office is responsible at a high level for ensuring compliance with civil rights laws that impact individuals with disabilities.

“Even if we’re meeting the floor, what can we do to make something more accessible above and beyond? And that may vary depending on restroom usage numbers, restroom parts when buildings are renovated, there’s multiple factors that go into that,” Ernst said. “So we’re in the evaluation phase right now.”

Ernst said a project they are working on right now with Student Affairs is the publication of a list of single user gender neutral bathrooms on campus.

Ernst said that while nobody has brought specific concerns to his office’s attention specifically about the psychology building, he still wants to know where the issues are for persons on campus.

“That being said, just because something may meet the standards from 1991 or per 2010 that they may not be working,” Ernst said. “If there are specific concerns, I’d like to see those brought forward so we could address them. If there’s things that we can do now, if it’s a concern of say, stall size for example, we would love to hear what those are, because those are fixes that we can address now.”

Note: If student, staff, or faculty has concerns regarding accessibility issues that they have encountered on campus at CSU-Pueblo, please contact Joshua Ernst of the Office of Institutional Equity at josh.ernst@csupueblo.edu. His number can be found under the Faculty & Staff Directory on the school website.

Ross Dausin to get Rookie Minicamp invite with the Tennessee Titans