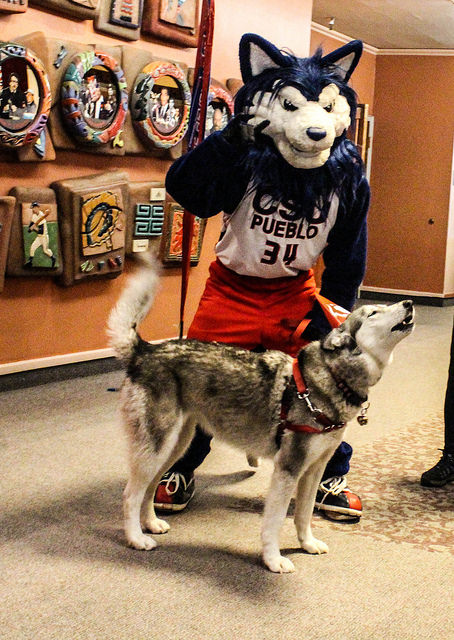 CSU-Pueblo mascot Wolfie’s 20th birthday brought the CSU-Pueblo community together to celebrate in the Occhiato University Center on Jan. 21.

The party provided students with CSU-Pueblo-themed cupcakes, Wolfie coloring books and a station to make their own plush wolves.

The plush wolves, which were provided by Student Life, were a favorite of those who attended.

Other highlights of Wolfie’s birthday included music from the campus radio station, Rev 89. Tundra, CSU-Pueblo’s living mascot, was also there to greet students as they came to celebrate.

“Wolfie’s birthday was a lot of fun and the cupcakes were good,” said CSU-Pueblo senior Anthony Schievelbein.  “My friends and I had selfie contests with Wolfie.”

While Wolfie’s birthday was the main reason for the celebration, Tundra’s howls drew the attention of the students.

Schievelbein said he went to Wolfie’s birthday party last year. While it was similar to last year’s celebration, it was just as fun this year, he said.

The University of Southern Colorado, now Colorado State University-Pueblo, adopted Wolfie as its mascot prior to the 1995-96 academic school year. He was officially introduced in 1993, and legislation went on to verify his existence in 1994.

The ThunderWolf came to life as USC looked to modernize its image following 60 years of being known as the Indians.

The current ThunderWolves logo is the third logo of the history of CSU-Pueblo.

The first mascot was a detailed head of a wolf with a mountain range in the background. After a few years, a new logo with the letters USC and a ThunderWolf took place of the old one. When USC changed its name to CSU-Pueblo, the current logo was created. 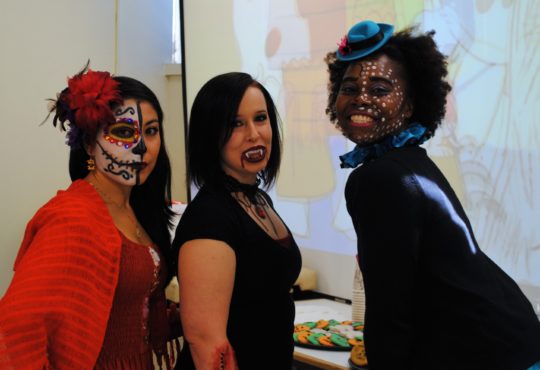 Getting in the spirit of Halloween

Bands battle to open for Ludacris