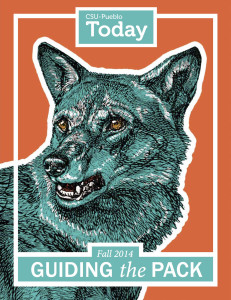 The fall 2014 issue of the CSU-Pueblo Today magazine was named Best Student Magazine at a recent student journalism competition.

The Today received the award during the April 25 Mark of Excellence luncheon at the Society of Professional Journalists’ Region 9 conference, held in Denver. The luncheon honored student journalists from throughout SPJ’s Region 9, which includes Colorado, New Mexico, Utah and Wyoming.

The judges selected the Today as best magazine “because it covered a wider variety of topics and people. It was fun to look at and to read the magazine.” The judges also noted that the Best Student Magazine competition was close this year, stating that it was a “(d)ifficult category to judge because all of the entries had a different focus. All entries were well-designed, with clean, consistent layouts.”

NASCAR racer speaks at the university

Behind the scenes of the Associated Students’ Government “Harlem Shake”

Fun in the Sun in the Pueblo Community