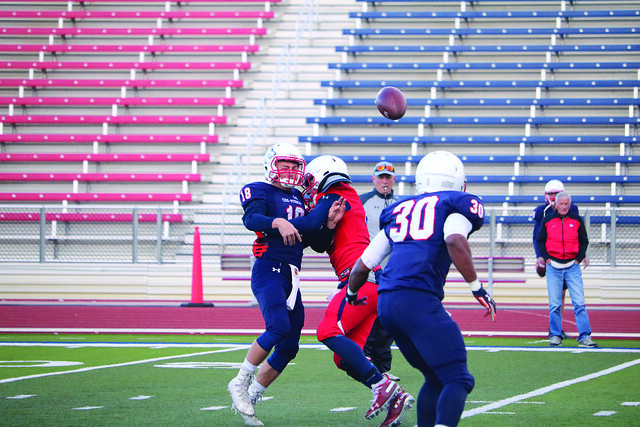 The game began with a few pregame drills, in which the Blue team was able to take a 7-4 lead. On the first play of the actual game, the Red team quarterback, Jordan Kitna handed off to wide receiver Isaiah Diggs on a reverse play.

Instead of running, Diggs threw a touchdown pass to fellow wide receiver, Nick Williams for 70 yards.

After forcing a three–and–out, the Red team’s offense returned to the field, where Kitna found Williams for another touchdown. Mitchell Carter’s extra point gave the Red team a 18-7 lead.

The Blue team was able to get things going on their next possession as sophomore quarterback Gunnar Lamphere scored on a 15-yard quarterback keeper. After a missed extra point, the score was 18-13.

The final score of the game was aided by a Red team interception in the second quarter. Senior safety Jamaal Sears picked off a pass, setting up Austin Micci for a two-yard scamper. The Red team led 25-20 at the half.

In the fall, Rosenbrock will be entering his senior season.

“Win every game and be the most dominant defense we can be,” Rosenbrock said. “If we do that, I’ll be happy.”

The second half of the game was a defensive battle. The score remained the same, and with three minutes left in the game, sophomore Momar Fall forced a recovered a fumble for the blue team.

The Red team defense was led by Rosenbrock, who had six tackles on the game. “I did well, both teams did really,” he said. “We had a lot of big plays and it was a fun Spring Game.”

Like Rosenbrock, Wristen was pleased with the way both teams played.

“I was excited, everybody played with energy, and guys were doing what they were supposed to,” Wristen said.

Wristen also gave his outlook for the upcoming season. “I’m looking for us to have a really good season. We have great kids who are working their tail end off,” he said.

The Thunderwolves season will begin on September 7 in St. George, Utah where they will face Dixie State at 6 pm.

Remembering and rebuilding at the Royal Gorge

You Want ‘Em? Go Out and Get ‘Em: Next Week’s Releases

Pueblo filmmakers ask for your back