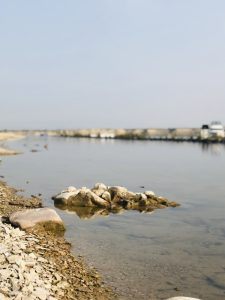 If you’ve been out to Lake Pueblo this summer, you might have noticed the rising and falling of the water levels. These days you might even be walking across places that you were swimming in at the start of the summer. However, there is no need to worry about the lake drying up. Water levels are actually above average for this time of year, according to the Bureau of Reclamation.

With fires and droughts running rampant this summer, Lake Pueblo has still seen lower levels in its lifetime. Stan Core, a maintenance mechanic at the area office of the Bureau of Reclamation said, “it’s been slowly filling up even though we’ve had a dry summer.” Core, who has been working for the bureau over 15 years, said he has seen the lake “much lower.” For most Pueblo residents, the reservoir is the hub of summertime recreational activities. But the lake is so much more than that.

Established in the 1970s, the Pueblo dam was built as part of the Fryingpan- Arkansas Project. The project was aimed toward supplying water for hydroelectric power, irrigation, municipal, and industrial uses. Additionally, from March through September, the upper region of the lake remains empty, specifically for flood control. This empty area is marked a storage space for extra water should a sizable flood occur. Enhancement of wildlife is another important quality of Lake Pueblo. Considered a fishing hotspot, the lake provides more than 4,000 acres of water and over 60 miles of shoreline, according to Colorado Parks and Wildlife.

Between now and next summer, the water levels will continue to fluctuate depending on the snowfall this winter. But there is no need to panic. Pueblo can expect to keep on boating, swimming, and fishing at its favorite lake. Levels are expected to remain normal. On Nov. 15, the Bureau of Reclamation will begin storing water for the following months, according to Core. “It’ll never fully dry up,” he said, “it would have to get awfully low to affect the recreational use of the lake.”