It has been a little over a week since Antonio Huerta and Maggie Geolat, along with 12 senators, were sworn in as Colorado State University-Pueblo’s Associated Students’ Government leadership team for the 2016-17 academic year.

The newly elected Generation of Victory leaders took over the reigns from Sarah Zarr and Gene Wilson’s team, Legendary.

The 12 senators are Alex Hyland and Keragan Ettleman from the College of Humanities and Social Sciences, Anthony Ball and Annica Roberts from the Hasan School of Business, Rachel Ruiz and Brandon Bayer of the College of Science and Math, Tyree Brown and Anna Jordan from the College of Eduaction, Engineering and Professional Studies and Matt Schein, Daniella Trujillo, Isaiah Morgan, and Hannah Higgs, who are at-large representatives.

Huerta and Geolat attribute their team’s victory to solid teamwork, successful branding and knowing when to let others take the lead.

Huerta said he believes that the GOV logo, which was designed by Jonothan Stephenson and features aspects of the Colorado flag, struck a chord with voters.

It was the first year students accessed PackLink, via the T-Wolf portal, to vote. The number of votes was down form last year.

The GOV team managed to stay within their campaign budget of $700, to which all 15 candidates contributed evenly.

Geolat offered some advice to future ASG leaders. “Make sure that you get involved on campus and understand the different aspects of how the university works,” she said.  The team is currently focusing on planning and organizing its priorities for upcoming fall semester.

“I really appreciate the other team because I really got to know them and they really wanted to get involved,” Huerta said. 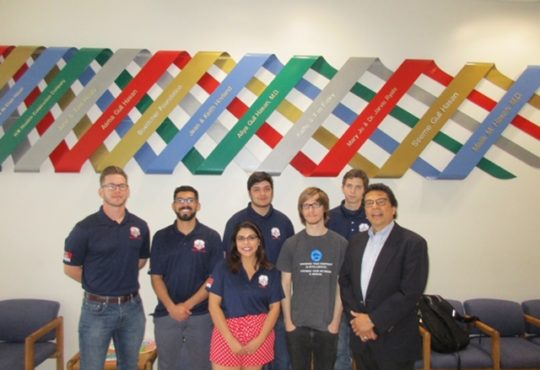