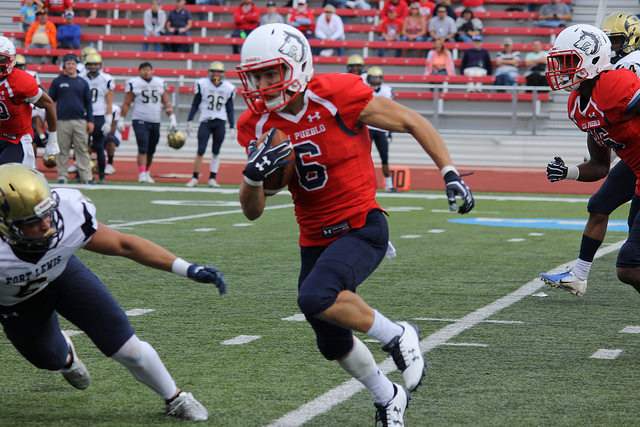 The Colorado State University-Pueblo football team will be back to face Colorado School of Mines for round one of playoffs.

The Thunderwolves had their first and only loss this season against the Orediggers on the road in week three. The Orediggers, who have the home field advantage, will host the Pack Saturday, Nov. 17 with a 12 p.m. kickoff.

Last year, the Thunderwolves were eliminated in the first round of the playoffs. This year, they enter the postseason fresh off an eight-game winning streak. Head Coach John Wristen said the team is not doing anything different than they have been doing all season in preparation for playoffs. “We are excited to go play,” Wristen said.

According to Wristen, the Thunderwolves have been in playoff mode since they lost to Mines earlier this season. “Our guys want to thrive on these opportunities,” Wristen said. “So I’m really looking forward to seeing our guys play on the biggest stage and getting into the playoffs.”

Wristen said the team looks forward to competing against Mines any time. “We have a lot of respect for them and I think it’s a mutual admiration for what they do in their program,” he said.

The Thunderwolves were hoping for another chance to play against Mines this year following their loss. “We were really stunned and hurt,” Wristen said. “We didn’t play our best game. We had some self-inflicted wounds.”

According to Wristen, the Thunderwolves are going to show up and enjoy this opportunity regardless of outcome. “Let’s go have some fun…” Wristen said, “we might have a chance.”

The Orediggers have not lost a game at home in the past three years. “I think it’s always a home field advantage in these things, and they play awful well at home,” Wristen said.

If the Thunderwolves are capable of advancing past the first-round this year, “it’s just the start,” to a challenging postseason, according to Wristen.

Kevin Ribarich, receiver and punt return, will be playing his final playoff season. “Obviously when it comes to playoff, your intensity and your attention to details increase,” Ribarich said, “we’re just trying to treat it like another game.”

The rivalry between the Thunderwolves and Orediggers has grown in the past couple of years. “We’ve been trading games at home, we’ll win, when they play at home, they’ll win,” Ribarich said.

Being in a competitive conference, the Thunderwolves play with a “win or go home” mentality. “You don’t get a lot of opportunities, so we treat every game like a playoff game,” Ribarich said, “if we lost, probably wouldn’t make it.”

The Thunderwolves continue their week-by-week attitude even into playoffs. “Theoretically if we win, we go play the number one seat in our region, but we played them last year we’re looking forward to get revenger there too,” Ribarich said.

Though the Thunderwolves are up against some teams they have already played this season, that might ultimately be their downfall in the playoffs. “There’s a philosophy we’ve had that it’s always harder to beat a team twice,” Ribarich said, “Commerce is still in, so if they keep winning, that philosophy could take hold with us.”

Middle Linebacker Brandon Payer said the team is working to fix key mistakes from the last game against Mines. “We’re just trying to fix what we can do better,” Payer said, “changing up little things that we feel are mistakes made in every game, not even just their game.”

“Rivalry wise they’re just another team for us that we want to go beat, get some revenge on,” Payer said. “We felt that we just didn’t play to our potential. We made a lot of mistakes that caused us to lose the game that we felt were self-inflicted.”

“I don’t think the loss we took earlier really has an effect on how the game is going to come out,” Payer said.

Editors Note: Our previous headline indicated that Colorado School of Mines is undefeated. They are not. They lost to Dixie State and share the RMAC title with the Thunderwolves.

Johnny Tapia death of a champion