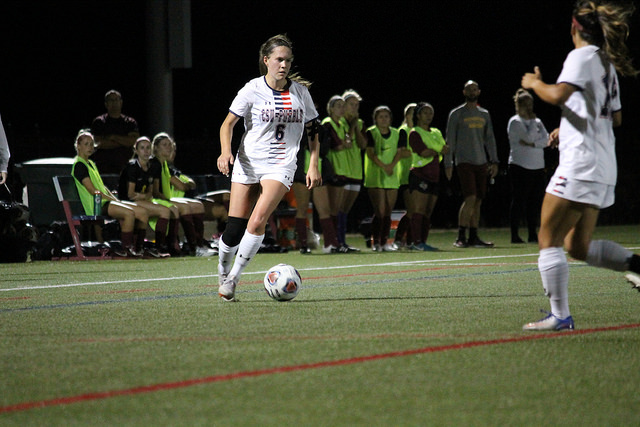 The Thunderwolves unloaded for 26 shots against the Mountaineers’ 14 at Art & Lorraine Gonzales Stadium. “Easily we should have put away… four them at least,” said Sierra Cardenas, Thunderwolf head coach. “So that’s tough, but that’s the game sometimes.”

The match was the Pack’s first home game since their Sept. 23 win over Colorado Christian, which kicked off a four game winning streak. Thunderwolf defensive midfielder, Kylee Sakaguchi said the Thunderwolves faced adversity throughout the match.

“The refs weren’t really going our way, but, you know, we held on.” The Thunderwolves were charged with 11 fouls and were called offside five times. Four of the offside penalties were called in the second half.

The Thunderwolves got their first shot off 31 seconds into the match when right midfielder Michelle Moure’s shot sailed wide. Just over four minutes later, attacking midfielder Mackenzie Bean launched the ball over the upright. The Thunderwolves 26 shots were split among seven players.

“We had a million shots,” Sakaguchi said. “We just didn’t execute them right away.” Emilie Eckhart, Western’s 5-foot-11 goalkeeper, grabbed 11 saves. “The goalie was tall,” Sakaguchi said. “We didn’t play any of the balls on the ground so, we just kind of learn from our mistakes now and realize what we gotta do and come out and do it.”

In the last ten minutes of regulation, the Mountaineers were awarded two corner kicks, both of which resulted in off-target shots. Before extra time, Cardenas said she discussed “being in the moment” with her team. “We talked a lot about being in the moment and making sure to not allow external circumstances or situations to get in our head.”

Many of the Thunderwolves’ opportunities in the first 90 minutes came off crosses, according to Cardenas. “We were getting a lot of opportunities on the flanks for crosses to come in,” Cardenas said. “We told them to make sure we have those runs in there so we can capitalize.”

Sakaguchi said the Thunderwolf defense kept their composure during the Mountaineers’ late-game offensive surge. “We have to make sure that ball is out for clearing it, getting it outside, so we can recollect and organize,” Sakaguchi said. “We stayed together, we worked as a team. We communicated and we held our line really well.”

The Thunderwolves had three shots in the second period of extra time, but none of the shots scored. “It wasn’t a bad performance,” Cardenas said. “We just got to relax in front of goal and put away the chance we create.”

The Pack sits in sixth place in the Rocky Mountain Athletic Conference with a conference record of 4-3-1. They play their next home game Sunday at noon against Colorado Mesa.

Neighbors Gets an ‘A’ for Raunch