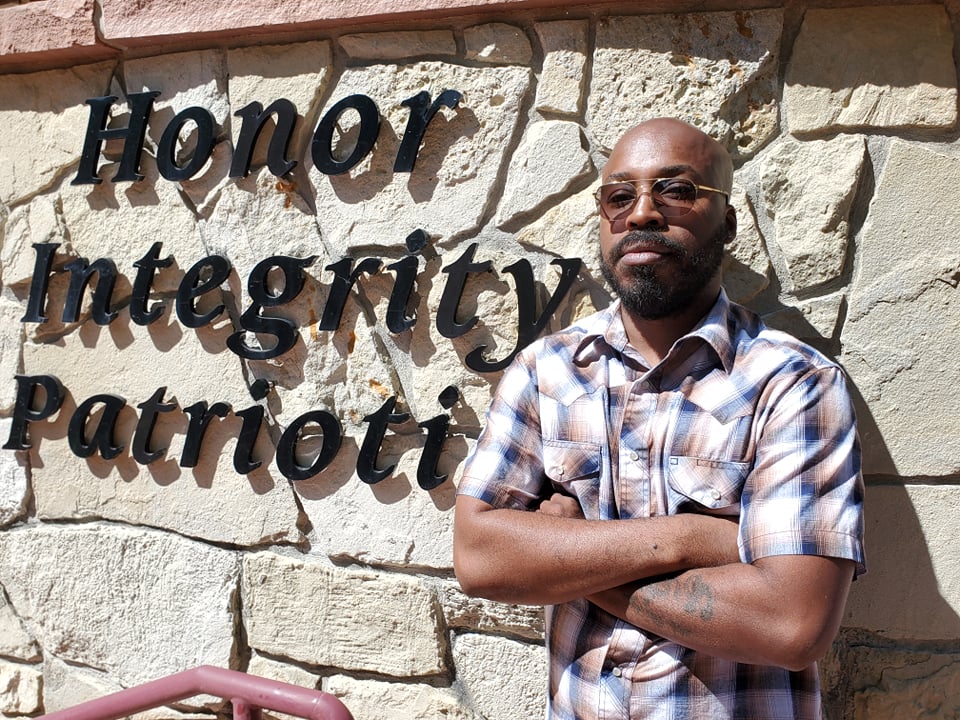 Colorado State University media communications student Cassime Johnson served for six years in the United States, including an overseas tour and a brief stint in Iraq. He left the service as a specialist. [Today photo/Regan Foster]
319views
0shares
By Alorah Saldana-Vigil
The Today

Bill Redmond-Palmer served in the United States Army and deployed to Iraq to help with Operation Desert Storm. While he did not serve in combat, the Colorado

State University Pueblo Media Communications student had some strong opinions on the U.S. withdrawal from Afghanistan.

“I am sad and pained by the knowledge that Afghan women and girls across the country will lose most, if not all the freedoms and opportunities that they had during the U.S. occupation of the country,” he wrote in an email. “I am sad for the Afghan people in general, that the assistance we have provided them, set them up to fail militarily and politically. We carry that burden and blame, and they carry the burden of our failure.”

The U.S. withdrawal in Afghanistan has sparked outrage within the country and community. On August 30, The United States fully withdrew and ended a nearly 20-year-old war. Numerous government decisions created a stir leaving American troops and allies in harm’s way of the Taliban. As the Taliban engulfed the land and grew stronger, promises to keep Americans and our allies safe were not kept.

As civilian and media commentary exploded on social media and other outlets, we spoke with student veterans who shared their experiences and thoughts about the frontlines.

One of those students, Cassime Joseph, cited the Warrior Ethos. The ethos comes from the Soldier’s Creed, an Army value.

“I will always place the mission first. I will never accept defeat. I will never quit. I will never leave a fallen comrade,” Joseph, an Army veteran, wrote in an email. “These words are also tatted [tattooed] on my back, for those are the values I live by.”

“With withdrawal and the killing of the 13 service members, I feel that we went against what a soldier stands for. I am very disappointed with this leadership,” Joseph stated.

While Redmond-Palmer did not see combat time, he wrote that, “If a vet without combat experience is so aggrieved by these events, imagine how much more they may be affecting my fellow vets who did serve in combat.”

“Sadness, anxiety, frustration and sometimes anger are the primary emotions attached to my experience,” Redmond-Palmer stated.

“We carry that burden and blame, and they carry the burden of our failure.”
— William “Bill” Redmond-Palmer
Colorado State University Pueblo student and former member of the U.S. Army

He mentioned sadness for members of the Afghan LGBTQIA+ community “whose fate during the prior Taliban rule was potentially execution,” and concern for Afghans who assisted the U.S. military, NATO partners, and civilians of all nations on diplomatic missions, working with non-governmental organizations and operating as contractors.

“The anxiety I have felt about evacuating the Afghans who worked for the military like translators began several weeks ago when news of the logjam facing those helpers in obtaining visas reached national news,” he wrote.

“I am also very anxious about so many Afghans, whose very lives are in immediate danger of execution by the Taliban as traitors and infidels, either because of their affiliation with the US and its military, or those who, oftentimes educated by us, now must fear for their lives because of the positions they have held,” Redmond-Palmer continued. “Specifically, along with the interpreters, embassy staff and direct employees, the fate of members of parliament and other members of the former government is a precarious one. Members of the former Afghan military, police, judges, prosecutors, journalists, activists and based on recent news, even musicians have reason to fear.”

While the future of Afghanistan is still uncertain, Redmond-Palmer expressed frustration that different decisions could have “lessened the negative impact of our departure, that were not taken because of the obstinate obsession to follow the political goal of leaving by Aug. 31.”

He wrote that politics and the blame game between elected officials and agencies of the U.S. government did little to resolve the problem while the crisis was ongoing.

“Later, once and if the mission is completed, there will be plenty of time and opportunities to assess and evaluate all the failures and successes,” he wrote.