When the season comes to an end, so will the Mary Rehfeld era. She’s officially played more games in the ThunderWolves uni than anyone else, and currently ranks fourth all-time among scorers.

Jonnie Draper was also a crucial piece of three RMAC Shootout championships, but her days are dwindling down.

Fear not though Pack fans. Two new stars have aligned and might just put CSU-Pueblo women’s basketball on the nation-wide map. 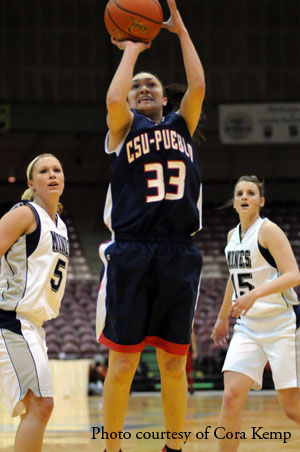 First-team all-RMAC selection Rachel Espinoza has taken the team on her back this year, and still had the strength to run with it. Espinoza led the team in scoring this year averaging about 14 points per game. She ran the show at the point guard position dishing out just under four assists per game.

Fellow sophomore Amanda Bartlett also shined this year starting half the team’s games averaging almost seven points per game. Because of injuries to Danielle Pritchett and Sarah Staggs, the six-foot Bartlett was forced to stray from her cozy home on the perimeter to a more physical position inside. She was able to hold her own inside averaging almost four rebounds per contest.

What was way more important than any of that was what the two youngsters did when they were put in the spotlight of the Showcase. Maybe a better way to put it was they stole the spotlight.

If it’s not enough for you that the two 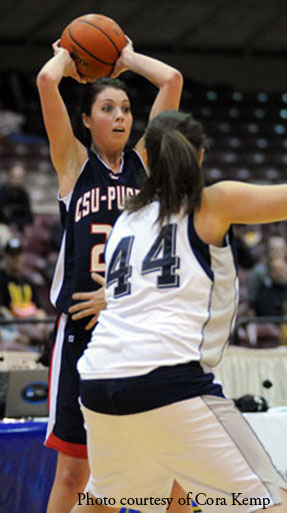 sophomores controlled the tournament, there is a much deeper connection between the two. They live together.

“We know each other’s boundaries,” Espinoza said of their relationship. “If either of us is having a bad game, I can get after her, she can get after me. If we’re both having a good game we feed off of each other. We really bond with each other like that.”

Bartlett sarcastically let me know while the relationship may look good on the court, we don’t want an inside look at their lives at home.

Whether or not Drown had anything to do with the housing arrangement, it wouldn’t be a bad idea for him to take credit for it.

The two girls still don’t know what it’s like to not cut down a net and the end of the conference tournament.

I know this season isn’t over yet, but when the final chapter is written in the Rehfeld-Draper book, at least the team still has some talented young authors.

The future looks bright for the ThunderWolves, unless Pat Summit and the Tennessee Volunteers come calling.

Solidifying their legacy: Manning vs. Brady

CSU-Pueblo wins in a blowout

Super Bowl interest on campus not affected by scandal