When the Broncos sent shockwaves through the league on Dec. 30, announcing they were terminating the contract of Mike Shanahan as both the Broncos general manager and head coach, they opened up doors to do something to drastically improve the franchise.

All this looks like a team should be competing for a Super Bowl.

It’s hard to believe the Broncos’ defense, what was once known as the “Orange Crush,” now wasn’t mediocre enough to let the Broncos showcase their offense in the playoffs. This year’s “Tang”, a watered-down version of the past Denver D, ranked a paltry 30th in points allowed.

The Broncos had the perfect opportunity to pick from an array of young defensive minds ready to become a head coach. With what was widely considered the best open job in the NFL, the Broncos had their choice of defensive coordinators Steve Spagnuolo of the New York Giants, Leslie Frazier of the Minnesota Vikings and Raheem Morris of the Tampa Bay Buccaneers.

The man who would’ve fit perfectly was Spagnuolo. He was the guy in charge of the Giants bringing the full on blitz on almost every down. Under Spag’s tutelage in 2007, the Giants led the league in sacks with 53. This year’s Broncos had less than half that with 26.

Imagine if the Broncos would blitz. They have a top three corner in the league in Champ Bailey on one side, and an above average corner in Dre Bly playing opposite him. With no pass rush this past season they had to cover guys for five to six seconds. If the Broncos would start sending DJ Williams & Co. up the gut after the quarterback every down, Bailey and Bly would only have to blanket their men for two seconds.

In a poll on the Denver Post’s Web site, over 70 percent of Bronco fans wanted Spagnuolo to be the next head coach. Coming in second place was “None of the above” and in third was the nostalgic choice of John Elway.

Not that the Broncos brain trust should listen to the fans when it comes to personnel matters, but in this case the vast majority of the orange and blue-collared faithful knew better than the multi-millionaire selection committee.

When owner Pat Bowlen announced that Josh McDaniels would take over the reigns for the Broncos, I had mixed 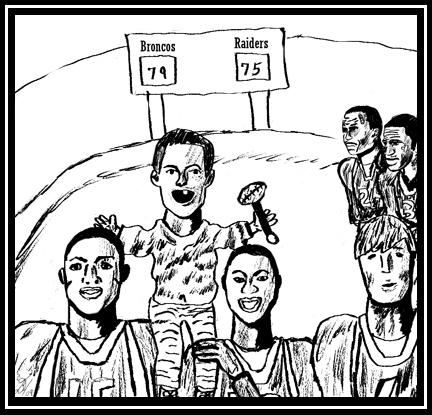 emotions. On one hand, I knew Bowlen made a huge mistake by not hiring Spagnuolo, or even Leslie Frazier who in my eyes was the second-best choice. On the other hand, I was extremely excited to watch an offense led by Jay Cutler, possibly break the 100-point mark.

I’m just worried Denver might lose the game they score 100-plus points in!

I’m not worried about McDaniels only being 32 years old. He studied under Bill Belichick for eight seasons in New England, and is widely thought of as the next offensive guru of the NFL. In fact, I think that’s why Bowlen hired McDaniels. He was afraid to be “the guy that past on the kid.”

In his first decision as head coach, McDaniels hired Mike Nolan as the defensive coordinator. A well-known name that made some fans happy. But if you look at the stats, Nolan inherited a good defense in Baltimore. Sure he had success with them, but he didn’t build that defense.

When he took the head coaching job in 2005 in San Francisco, he inherited the league’s worst defense that allowed 28.3 points per game. In his four seasons in SF the defense ranked 30, 32 and 20 in scoring defense before he was fired during the 2008 season.

So in the two major coaching moves the Broncos have made this offseason, they’ve botched 1.5 of them.

As I said before, the Broncos will be a fun team to watch when they have the ball this season. But unless some big names are brought in through free agency and the draft, don’t expect much out of a Josh McDaniels and Mike Nolan-led defense.

Cartoon drawn by Katherine Parker, a designer/artist for the TODAY