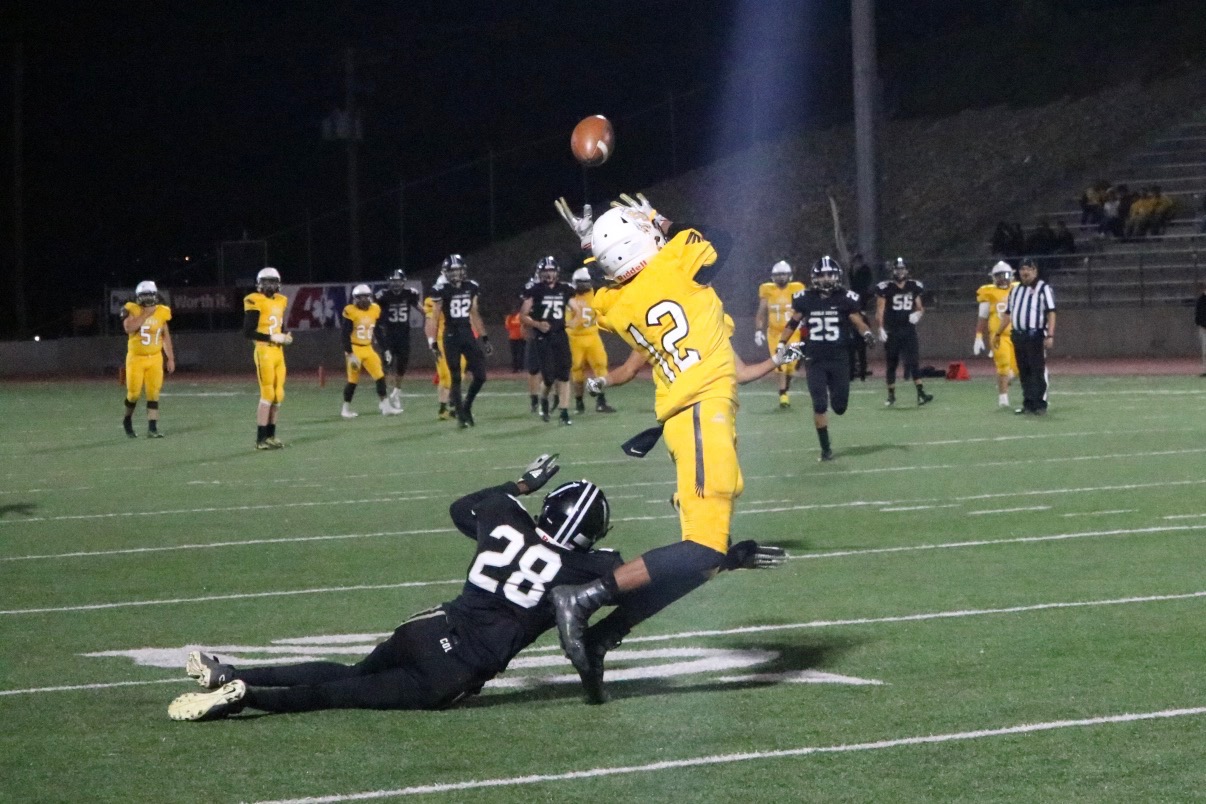 The cannon returned to the east side Friday after a year hiatus.

On a windy night at Dutch Clark Stadium, the East Eagles defeated the rival South Colts 41-14. The East offense scored a total of six touchdowns.

This was the 60th game between the two high schools, both opened in 1959, and the 43rd meeting since the cannon was introduced. These two programs have combined for four state championships in the last four years. Last year the Colts won 34-19 and went on a 4A championship run.

With South reclassifying to 3A this year, the game also was the start of South-Central League play for both teams. “We’re 1-0 in league most importantly,” said Eagles head coach Andy Watts.” “Now we’re one step closer to our regular season goals to win the cannon and win the league.” The Eagles now sit at 4-2, ranked number nine in 3A coming in to the Cannon Game.

Wide receiver Kain Medrano had 97 receiving yards and three touchdowns in the win. The UCLA commit also had an interception in the second half, his fourth on the season. The Eagles played Discovery Canyon without Medrano two weeks ago and were routed 52-24.

“This game is great motivation, we as a team have to be ready for anyone to go down at anytime and step up,” Watts said. The Eagles have won two of three Cannon Games since Watts was named head coach.

First quarter touchdowns for East’s Kaeden Bowman and former Pueblo Centennial quarterback Pat Gonzales put South in a hole. The Colts didn’t have a first quarter first down and were scoreless in the first half. An Andrada to Medrano touchdown on a slant pass gave the Eagles a 21-0 halftime lead.

South junior Jackson Dickerson scored two second half touchdowns, one on an 87-yard kickoff return and another on a 33-yard reception. The Colts fall to 1-5 on the season, a year removed from a 13-1 state-championship winning team. South’s only win on the season came against the Lewis-Palmer Rangers last week. For a chance at the playoffs, the Colts will have to win the rest of their games.

The cannon will now change hands and become a rallying call for Eagles down the stretch. Dutch Clark stadium was packed with about 10,000 fans for the Cannon Game. “The east side of Pueblo is loud and proud and came out strong in numbers, and God bless everybody who came we love them all,” said Coach Watts.

The Colts will try to rebound next week against SCL opponent Pueblo County. The Eagles will look to continue their winning ways against 3-3 Centennial.

‘The Other Latinos’ shares culture with students