A new school year is the perfect chance to start over.

It’s an unparalleled opportunity to begin again with a clean slate and build something from the ground up, especially for students who might not have had the most enjoyable or productive semesters in the previous year.

Students, however, are not the only ones who get that chance.

CSU-Pueblo athletic programs also get a clean slate, and like a wide-eyed college freshman in their first day on a big campus, the opportunity to build a new identity begins now.

Back to school means back to sports, and the first of those sports kick-off this week for Pack athletics. Fittingly, the first game of the year is the school’s most popular sport— Pack football.

The winningest football team of the decade starts the season on the road with an in-conference matchup against in-state rival Colorado School of Mines, a game with so much hype that it will be played on ESPN3 as well as WatchESPN.

The Pack is ranked No. 5 in the country by the American Football Coaches Association going into the season, with Colorado School of Mines being another top 20 ranked team with the 18th overall ranking.

CSU-Pueblo’s cross country team will have their first meet of the season on Friday, at the Border Classic in Johnson City, Kansas.

Four CSU-Pueblo cross country athletes were named to the RMAC preseason all-conference team, and will be athletes to keep an eye on in this meet and over the course of this season.

For the men, returning All-Americans Derrick Williams and Marcelo Laguera were recognized, as were returning national qualifiers Bailey Hughes and Miriam Roberts for the women.

Pack volleyball opens up their season Friday, at the Texas Women’s tournament, in head coach Jill Muhe’s first game at the helm for CSU-Pueblo. The team will play two games Friday, as well as two on Saturday in the tournament.

Friday the Pack plays Texas A&M Commerce at 10 a.m., and Texas Woman’s at 5:30 p.m, and Saturday, they face Lubbock Christian and then Midwestern State at 8 a.m. and 1 p.m. respectively.

One player to watch in this tournament for the Pack is senior Mariangela Perez, who was voted as a pre-season all-conference team member in the RMAC. The two-time all RMAC opposite hitter is from Catia La Mar, Venezuela.

The last CSU-Pueblo sport to kick off over the next week will be CSU-Pueblo’s men soccer on Friday at home against Newman University.

The Thunderwolves enter the season picked to finish sixth in the RMAC by the preseason coaches’ poll, and will try to improve upon an 11-9 record from last year.

They will hope for their first win of the season on their home field, where the Pack had a 5-4 record last season. Their next game will come Sunday as the Pack faces off against Lubbock Christian in another home game at Gonzales Stadium.

The Pack will likely stick to its normal strengths of running the ball effectively, and shutting down the opposing team’s offense with its perennially strong defensive unit.

The matchup to watch will be the Orediggers Dvorak, against the Pack’s D, who held Colorado Mines to just 367 total yards in last years competition, a 49-21 victory for the pack.

CSU-Pueblo Women’s soccer also kicks-off this week, with two home games in three days to start the opening week of the fall season.

Their first game will be Thursday, against Texas Woman’s, as CSU-Pueblo enters the contest picked to finish the year in eighth place in the Rocky Mountain Athletic Conference, by an RMAC coaches poll.

A player to watch in this game, as well as throughout the season is preseason all-conference selection Jessica Westhoff, who started all 18 games at midfield for the Pack last season. 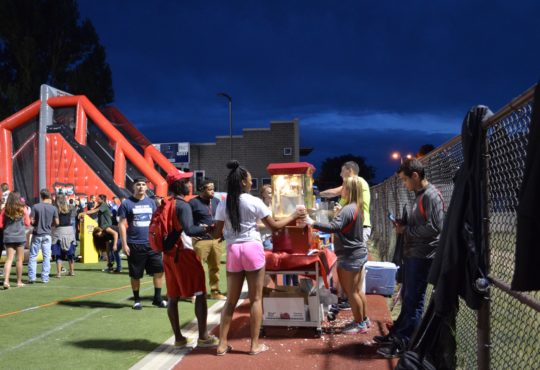 Using the Alumni to bring in new students