Both Michelle Ambuul and Rome Smith led their teams to victory each scoring a career-high 32 points. On Monday the Rocky Mountain Athletic Conference announced the two as RMAC Players of the Week.

“It’s kind of funny we both scored 32,” Smith said. “Before the road trip I asked her how she had been playing, and she told me not very well. I know last year at one point she was hitting 50 percent of her 3-point shots, so I just told her it was only a matter of time before she would come around.

Ambuul’s scoring performance in the team’s 81-79 win over Quincy was the highest point output by a women’s basketball player since Feb. 4, 2006, when Lauren Westerman scored 34. Eighteen of Ambuul’s points were made from behind the 3-point arc.

The night before she scored 13 points and for the second time this year missed her first college double-double by one rebound.

Ambuul is averaging a team-high 15.8 points per game this season.

Smith led the men’s squad with 32 points in a 69-66 overtime win over Oklahoma Panhandle State University. Seven of his points were in the extra period. Smith also grabbed seven rebounds in the game.

Smith is averaging a team-high 16.8 points per game for the Pack.

Smith, not really into individual recognition, said he wasn’t aware he had won the award, but said he is honored anytime his team gets recognition. He also said it feels better being able to share it with fellow ThunderWolf, Ambuul. 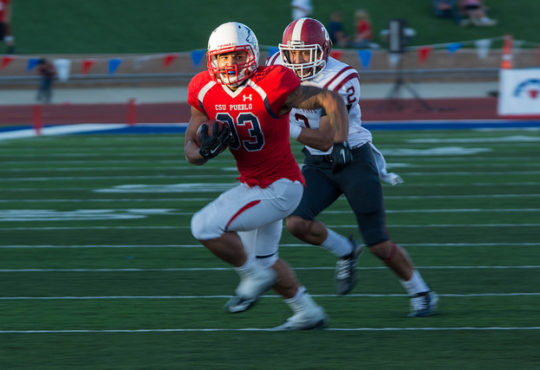