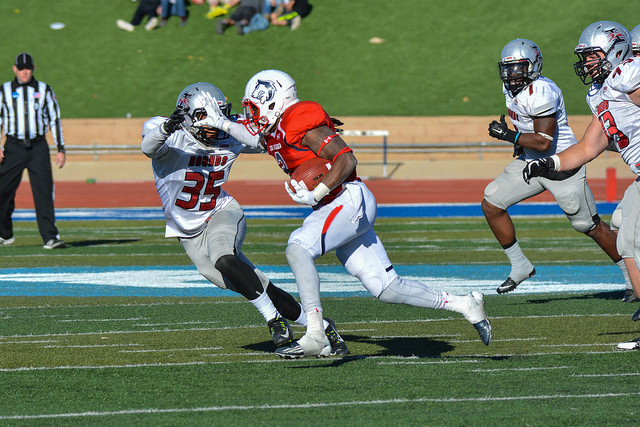 In the first round of the 2015 Division II college football playoffs, the No. 4 seeded CSU-Pueblo Thunderwolves took down the No. 5 seeded University of Indianapolis 27-14 at the Neta and Eddie DeRose ThunderBowl.

The Pack’s primary offensive spark came in the form of second-string sophomore running back Bernard McDondle, who handled the bulk of the team’s carries following an injury to his older brother and team rushing leader, Cameron McDondle.

Cam McDondle, who is a Harlon Hill Division II National Football Player of the Year candidate and was named Rocky Mountain Athletic Conference Offensive Player of the Year, left the game in the second quarter after re-aggravating a lingering ankle injury and did not return.

“Cam will be day-to-day day right now,” said CSU-Pueblo’s Head Coach John Wristen. “It’s that ankle. He got it tweaked a little bit underneath the pile. He says that someone grabbed it and twisted it.”

McDondle attempted to re-enter the game after being evaluated by training staff members, but Wristen chose instead to leave the fate of the Pack’s rushing attack in the capable hands of Cam’s younger brother Bernard.

“He was trying to come back but I just said, hey, let’s just be smart with it and turn it over into his brother’s hands,” Wristen said.

In the team’s most crucial game of the year this far, Cam’s early departure set the stage for Bernard to shine.

And shine he did.

Bernard rushed for 187 yards on 28 carries, including three game-changing touchdowns in the second quarter, averaging 6.7 yards-per-carry.

“I knew when he went down that somebody had to step up,” McDondle said.

Facing the Greyhounds in CSU-Pueblo’s first-ever opening round playoff appearance, ThunderWolves players and coaches entered the contest knowing all too well they had their work cut out for them to leave with a win.

“It was a great opportunity to go play against a great team,” Wristen said. “They’re well coached and they’re well schooled so we knew we were gonna have a heck of a dog fight coming in here.”

“The whole key about playoffs is to just win by one and keep advancing and we were able to do that,” Wristen said.

CSU-Pueblo once again relied on an excellent performance from it’s defense, led by RMAC Defensive Player of the Year, Morgan Fox.

Fox, who finished the regular season with the most sacks per game in all of Division II, tallied his 16th sack of the year in the game, eclipsing former Pack defensive lineman Darius Allen’s former program records for sacks in a season, with 16, as well career sacks, with 35.

“It’s cool just so Darius will stop texting me about it,” Fox said jokingly, “but I’m just happy that we’re moving on more-so than getting the new sack record.”

Facing a UIndy team that had the least amount of turnovers in the nation, having only turned the ball over five times in the entire regular season, the Pack forced two Greyhounds interceptions in the first half, leading to two McDondle TD’s for 14 Pack points.

“I think pressure helps. When the D-line gets good pressure it makes the secondary’s job easier and when the secondary covers well it makes our jobs easier,” Fox said.

“I think we just feed off each other.”

The Pack finished the contest with two sacks and two forced turnovers, holding the Greyhounds to just 284 total yards and 14 points.

The Pack will now hit the road to face the regions No. 1 seed in Midwestern State University, for the team’s first road playoff appearance in the last five seasons.

“In the last five years this will be our first road playoff game besides the national championship game so I think our kids are going to embrace it,” Wristen said.

“We really don’t care where we play. We’re lucky to play the number one seed. It’s nice for us to go on the road, it’s gonna be hostile environment and we’re gonna have to go and play one heck of a game to beat Midwestern.”

The Division II tournament’s second round contest will be held in Wichita Falls, Texas, on Nov. 28, at noon Mountain Standard Time.

“I’m totally proud of these players and I’m proud of our coaches and we get to play over Thanksgiving break and there’s not a lot of programs in the country that can say that,” Wristen said.

A storyline added to the Marvel Universe