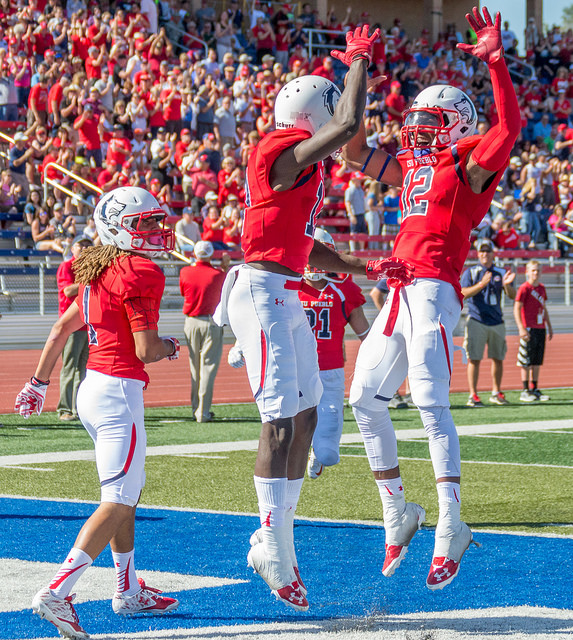 Harnessing a week-by-week team mindset that every week’s goal is to go 1-0, Pack football will look for another 1-0 week against Adams State with redshirt-freshman AJ Thompson at the helm for their road game.

In last week’s contest against Western New Mexico, the Pack used a defensive-oriented second half approach to stop the Mustangs. In their 42-27 victory, they allowed 21 points in the second quarter but only 6 points in the final two frames.

After both teams went scoreless for their opening drives, both offenses scored 21 points in the second quarter. At halftime the ThunderWolves flipped the switch and garnered a balanced attack on both sides of the ball.

The ThunderWolves allowed only 15 net rushing yards against the Mustangs, their best effort against the ground game since allowing 9 yards to New Mexico Highlands on Nov. 15, 2014.

Looking ahead to the road game against the Adams State Grizzlies, the ThunderWolves currently own a 19-10-2 all-time record against the Grizzlies in a series that dates back to 1938. The Pack has won six straight games against Adams State in this time span.

CSU-Pueblo is 9-4-1 all-time on the road and have won their last three meetings in Alamosa. Last season at home, both teams failed to score in the first half, and the Pack took the first lead with a touchdown six minutes into the second half.

The Pack improved on a 7-7 tie with 10 points in the fourth, capped by a one-yard run by Cameron McDondle with just under three minutes left.

Entering this contest the ThunderWolves are ranked at No. 10 in the American Football Coaches Association Division II Coaches’ Poll. The Pack also rank in the Division II Power Rankings at No. 10.

The Adams State Grizzlies are coming off of a historic home victory against Western State. After trailing 42-6 in the second quarter, Adams State rattled off 36 unanswered points to force overtime at 42-42. Following two overtime sessions, the Grizzlies won 52-51 to secure the largest-ever comeback in NCAA Division II history.

The ThunderWolves look to challenge the Grizzles on the road in what some call a rivalry game in Alamosa this weekend.  This will be the 32nd meeting with the Grizzlies.