The ThunderWolves were simply overmatched.

New Mexico Highlands University jumped out early on a sluggish Colorado State University-Pueblo team looking to make a final push toward postseason play and cruised to a 75-58 win.

The Cowboys’ defensive pressure forced six ThunderWolves turnovers which turned an early 6-4 Pack lead into a 23-8 deficit with 11:00 remaining in the first-half.

“When you play good teams like that it points out the weaknesses your team has,” ThunderWolves senior, guard Jordan Surratt said.

The surprising Cowboys, who were predicted to finish last in the Rocky Mountain Athletic Conference, improved their overall record to 18-6 and remained in second place in RMAC play with a 12-4 mark.

“They’re a good team,” CSU-Pueblo head coach Pat Eberhart said. “They’ve got our number and are very deserving of where they are in the standings.”

The conferences highest scoring team had no problem putting points on the board against the ThunderWolves in the first-half, scoring 44 en route to a 22-point halftime lead.

But any hopes of an amazing comeback were vanquished when New Mexico Highlands guard Rashad Peterson made a 3-pointer from the right corner followed by a fast-break layup by Roman Andrade to put the Cowboys up by 20, 69-49.

Junior center Jake Trahern led CSU-Pueblo with 13 points and 8 rebounds.  He was the only Pack player to score in double digits.

With the loss, the ThunderWolves fell to 8-8 in conference play, but still remain in position to secure a berth into the RMAC postseason tournament.

The loss snapped a 7-game home winning streak for CSU-Pueblo over the Cowboys and was only their third win in 33 contests against the ThunderWolves in Pueblo.

Tempers flared late in the game when ThunderWolves guard Jazz Williams was called for a hard foul and a technical foul for jawing at the Cowboys’ player following the play.

On a positive note for CSU-Pueblo, freshman Ty Trahern scored his first points of the season on a short jumper in the lane and finished the game with three points.

Up next for the ThunderWolves is a rematch with Western New Mexico on Thursday at Massari Arena. 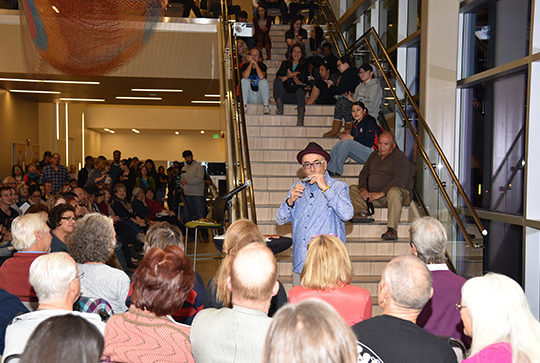