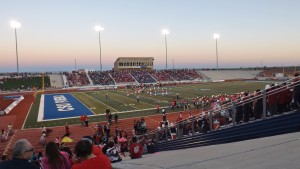 The idea of CSU-Pueblo advancing from Division II and becoming a Division I football program has been tossed around a lot lately, but it is not going to happen any time soon.

The Thunderwolves have faced two Division I opponents in as many seasons, and have come away victorious in both games. Last year, the team faced the University of Northern Colorado on the road and won with a final score of 41-36. This year they went to Texas and beat Sam Houston State University with a final of 47-21.

The victory against Sam Houston State marked the first time in school history the football team beat a ranked Division I opponent from the Football Championship Subdivision.

The Thunderwolves have also had tremendous success against other Division II schools and have won 42 consecutive regular season games. The team’s dominance during the regular season has not translated to playoff wins, but it has created quite the buzz surrounding a potential leap in competition.

One player behind the move is junior running back Cameron McDondle.

“Oh yeah, I definitely think we could go up there and do our thing against the big schools,” McDondle said.

The running back acknowledge that Division I is a different level of competition all together, but he said the idea of more competition would only drive the team to compete and work harder.

“We don’t really think they’re big and bad because they are a D-I program. We see them as a football team just like us, and I’d love to get the chance to take the field with them,” McDondle said.

The last requirement, and most problematic for CSU-Pueblo, is funding and revenue for the athletic programs. The FBS is the Football Bowl Subdivision, which requires any program that is in the division to average 15,000 paid fans in attendance for every home game. The second division, known as the FCS or Football Championship Subdivision, has no such requirement for their programs.

The Thunderwolves are a rising power in Division II, but they are a long way from becoming a Division I program. The closest the team will get to Division I for the next few years is the occasional game scheduled against an opponent from the FCS.

This week the team will stay within Division II and the RMAC as they take on Fort Lewis on the road. The Thunderwolves are a perfect 5-0 on the season while the Skyhawks are 1-4 and 0-3 in RMAC play. CSU-Pueblo will try to continue their streak of 42 consecutive wins before returning home next week to face Chadron State.

Renovations underway on the Underground of the Occhiato University Center