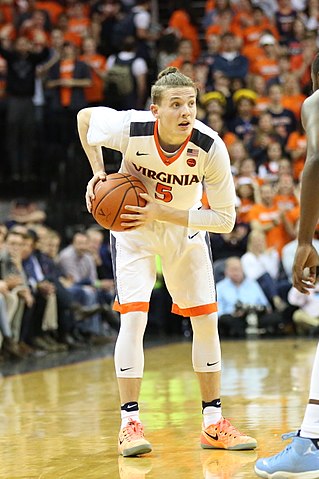 Kyle Guy and the Virginia Cavaliers will take on the Auburn Tigers Saturday at 4:09 p.m.
6.4kviews
0shares

As always, March Madness brings surprises to college basketball’s 68-team tournament. But this year’s Final Four group brings teams that are rarely, or have never been on this stage.

The teams that will compete in this year’s Final Four are the Michigan State Spartans, Texas Tech Red Raiders, Virginia Cavaliers and Auburn Tigers.

Out of the four teams, Michigan State is the most experienced in terms of March Madness. The Big Ten regular season and tournament champions enter the Final Four this year with a 32-6 record, and will compete at the stage for the tenth time in school history.

Michigan State achieved the Final Four by beating Bradley, Minnesota, Louisiana State and Duke, who was the favorite to win this season’s tournament.

The Spartans coach, Tom Izzo, has been magnificent. In his 24th season, Izzo holds a 593-230 record, and has led the Spartans to their 22nd straight NCAA Tournament; the 3rd longest active streak in Division I.

Izzo is seeking his 2nd National Title with the Spartans in hopes to reach the Hall of Fame.

The Spartans on the court are led by Cassius Winston, who leads the team in points and assists.

Texas Tech enters their first tournament appearance in school history. They reached the Final Four by beating Northern Kentucky, Buffalo, Michigan and Gonzaga. The Red Raiders are 30-6 overall this season under head coach Chris Beard, who is in his third season with Texas Tech.

Beard’s statement about going to the Final Four is taking the Internet by storm.

The University of Virginia enters as a favorite to win the tournament, being the only number one seed to reach the Final Four this season. Last season, they were the first team in tournament history to lose to a 16th seed.

The Cavaliers are 33-3 overall. They will play in their 3rd Final Four in school history, their first since the 1981 season. They reached the Final Four by beating Gardner-Webb, Oklahoma, Oregon and Purdue. They are coached by Tony Bennett.

On the court, the Cavaliers are led in scoring by Kyle Guy.

“I’ve said in previous interviews this week that most of the credit goes to the guys who aren’t here anymore,” Guy said. “They did all the work and built the foundation, and we were lucky enough to walk into a great program with the best coach in the country.”

Auburn enters the Final Four as one of the hottest teams. They are 30-9 overall, and have won 13 straight games, including NCAA Tournament victories over New Mexico State, Kansas, North Carolina and Kentucky.

The Tigers will compete in their first Final Four in school history and will be under the instruction of head coach Bruce Pearl.

Auburn, will be without Chuma Okeke, who lead the team in rebounds and steals before suffering an ACL injury in their win over North Carolina.

““I’m really proud of our team,” Okeke said after the North Carolina game. “We were able to make history tonight.”

University Funding: A balanced budget and looking toward salary increases