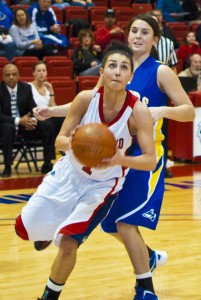 The game started with both teams’ plays mirroring the other.  Both were tough on defense, as expected, and both shot equally poor.  The ThunderWolves then went on an unanswered nine-point scoring run and started to gain momentum.  The Lopers, who rebounded well early on in the game, began to lose control and the game continued to go in CSU-Pueblo’s favor.

“Tonight we were a team and played well as a team,” senior Kendall Babler said. “I simply came in, did my job and it seemed to be enough.”

Babler, who came into Saturday night’s game averaging 12.2 points, and the rest of the ThunderWolves had little time to prepare for the Nebraska-Kearney game after playing Chadron State the night before.

As points from the field were scarce, the ThunderWolves relied on successful free throw shots to put them ahead. CSU-Pueblo shot 29 free throws throughout the game. Babler led the team in free throws, shooting 8-for-10 from the line.

Nebraska-Kearny’s only threat in the first half seemed to be Vanessa Leeper-Jones with her 4 points. Her team would help rally back in the second half as all the starters for Nebraska-Kearney checked in. With seven minutes left in the game, the Lopers were down by six points, but the steam quickly faded and the ThunderWolves came out with a victory.

CSU-Pueblo will be on the road for their next three games. The road trip starts Jan. 27 when they take on New Mexico Highlands.

Pack stands tall in face of stiff competition in Phoenix