HomeSportsLunch with a Side of Sports
Sports
12 years agoSports
2.9kviews
0shares

For the first time, the intramural Basketball League is going to play at lunch hour.The first intramural sports leagues start in one week, but rosters are due to the Student Recreation Center Sept. 4, with games starting on Monday, Sept. 7.

“It is an experimental league,” Michal Hughes, the assistant director of the student recreation center, said. There will be only one division for the men’s, women’s and mixed teams.

Those who wish to participate can also sign up as a free agent if they do not find enough people for a whole team. A free agent will fill an uncompleted team up, if one member of that team is prevented for any reason and not able to participate in the games. 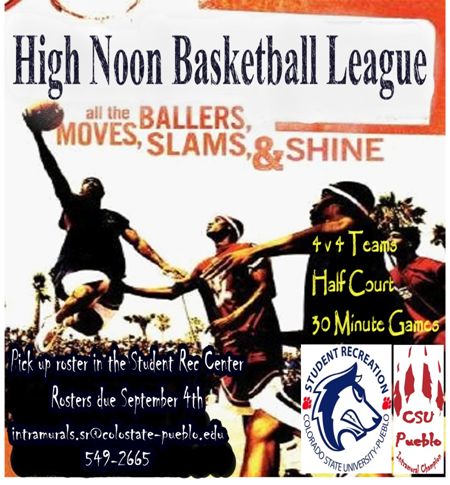 One team consists of four players and every game is played on half courts for 30 minutes in the Student Recreation Center.

Intramural Flag Football League is also starting. The games are going to take place Monday through Thursday from 6 to 10 p.m. on the recreation field north of Belmont Residence Hall. Teams can participate in three different divisions: men’s, women’s and mixed teams. Each team is to be composed of nine players.

Flag Football is a non-contact sport, where the players wear a belt with flags around their waists. Instead of tackling and running in each other, the opponents try to pull off the flags of the belt.

The leagues are open to all Colorado State University-Pueblo students, staffs and employees. There is a team entry fee of $15 for the lunch-time league or $30 for the evening league.

“Since teams are paying, we will guarantee a certain amount of g 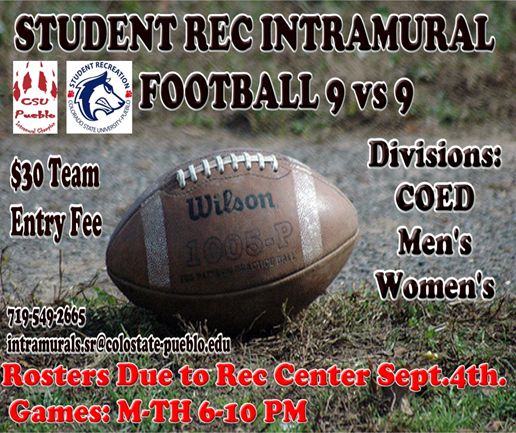 ames,” Hughes said, “but it depends on how much teams sign up for the leagues.”

The leagues typically take four weeks and the participants are awarded a T-Shirt. Rosters can be picked up in the Student Recreation Center, although no teams have signed up for the leagues yet.

“It is the same as the last six years, the students give in their rosters mostly on the last date of the due,” Hughes said. Last year about 30 teams joined the Flag Football League.

Hughes said the primary goal of the intramural sports leagues is to provide an on campus opportunity to students, staff and employees to recreate. It is just something different from working and studying, he said.

“It is a great way to meet friends, stay healthy and active and to get involved,” Hughes said. “Intramural sport keeps the students from going out and doing something unhealthy.”

Hughes also said this offer is also a great chance to keep the students together and to be interfering outside the classes.