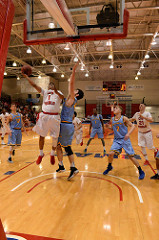 Colorado State University Pueblo men’s and women’s basketball faced off against the Fort Lewis Skyhawk’s Saturday night at the Massari arena in Pueblo The women won 66-50 and the men fell short losing 84-75 to the Skyhawk’s who are ranked No. 14 in NCAA Division II.

The women’s victory came from a rally in the third period. Lead by Coach Jim Turgeon the women were able to outscore the Skyhawk’s 18 to 11, giving them the momentum to push through the fourth period and putting their record at 23-0, continuing the best start in school history.

Joe Folda, the athletic director at CSU-Pueblo, spoke about the effort last night and how it’s a testament to how the season is going so far: “Defensively they play hardnosed man to man and rebound well at both ends of the world. Offensively they have a nice balance between the inside game and perimeter game,” he said.

Besides outscoring the Skyhawk’s throughout the game the pack were able to out rebound the Skyhawk’s 45 to 36. Katie Cunningham, junior, was able to collect 11 of the rebounds and was also able to score 12 points giving her a double-double.

Tuileisu Anderson, junior, was able to score 26 points off 11 of 23 field goals made, making her the highest scorer in the contest. This wasn’t the only milestone Anderson was able to accomplish. Friday, Anderson tallied her 1000th career point in a winning effort against Adams State.

Next, the No.3 ranked Thunderwolves will take on New Mexico Highlands University to keep their winning record alive. Tuesday’s game will tip off at 5:30 p.m. at Masarri Arena. The night will also consist of recognizing all student-athletes who achieved a 3.0 GPA or higher as part of Honor Roll Night.

The men’s basketball lost a hard fought battle against the Fort Lewis men’s basketball team Saturday night after the women finished their game in Masarri Arena. The score was 84-75, the pack were able to head into halftime only trailing by two but the Skyhawk’s jumped on the Thunderwolves early to start the second half going on a 11-3 run.

Senior Nelson Kahler, was the leading scorer for the pack with 16 points and Mark Williams, junior, led the team with rebounds recording seven. Fort Lewis who was ranked No.14 in the country for NCAA Division II heading into Saturday was shooting 52.7 percent from the field which was currently ranked third nationally but only shot 46.2 percent against the pack.

The Thunderwolves won the turnover battle only giving the ball away 10 times but it was the rebound game being out rebounded 35-29 as well as the bench points that put the pack in a hole that was later hard to dig out of.

The pack look to bounce back Tuesday at Masarri Arena against New Mexico Highlands University at 7:30 p.m. which would close out a three-game homestand for the Thunderwolves.