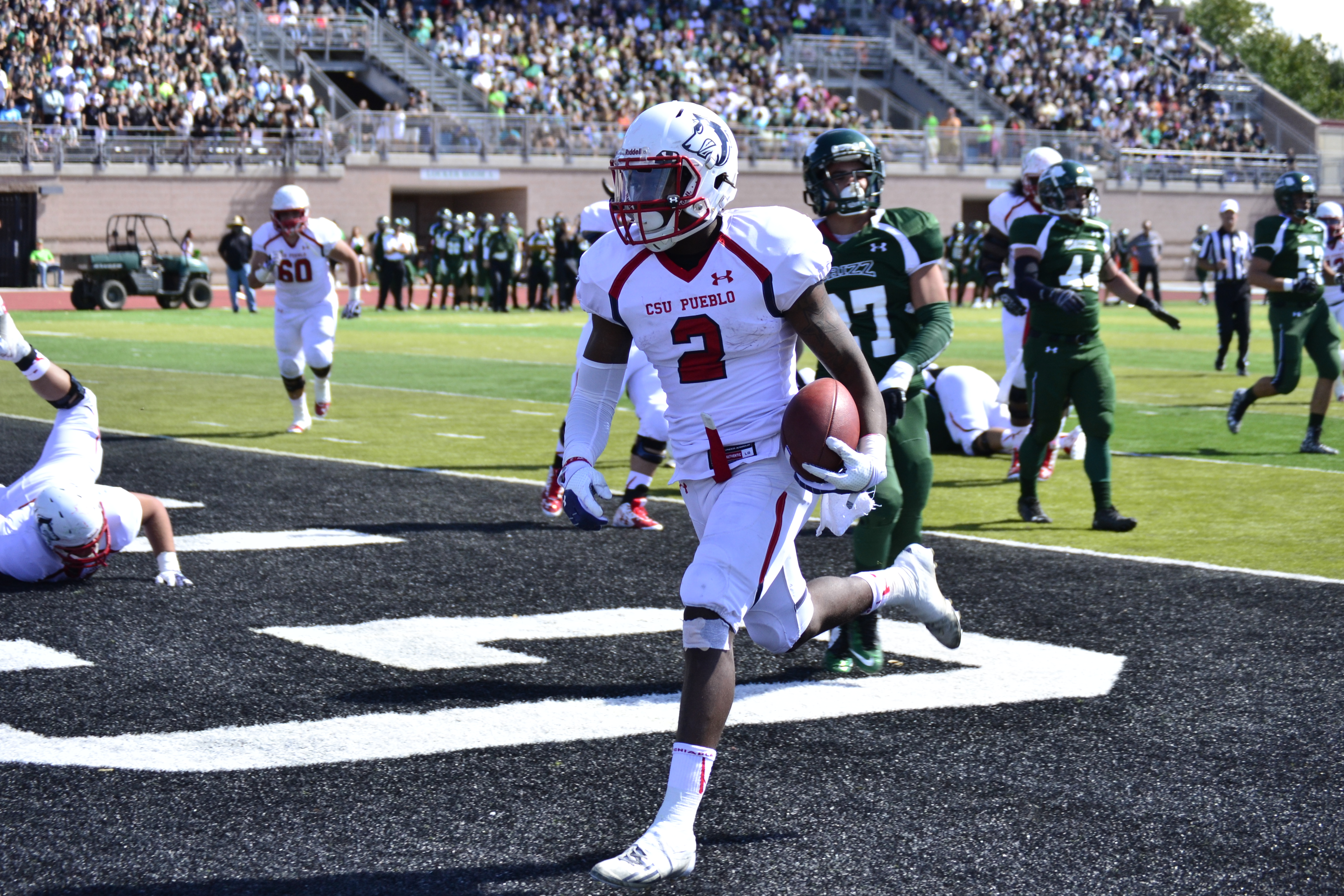 Bernard McDondle runs in for a touchdown against Adams State. Photo by Dustin Cox.
1.9kviews
0shares

CSU-Pueblo Football rolled out of Alamosa with a 56-0 victory over Adams State Oct. 3.

The No. 10 ranked ThunderWolves improved to 3-0 in Rocky Mountain Athletic Conference play after a dominating win over Adams State on the road. The Pack controlled the ground game on both sides throughout the game.

The offense accomplished 386-yards and the defense allowed only 10 rushing yards from Adams State. The 386-yards is a best rushing effort for the ThunderWolves since the program restarted in 2008. The second most was against the Grizzlies in 2009 when CSU-Pueblo totaled 362 yards.

The 10 yards allowed marks the sixth time the Pack allowed 10 or less rushing yards, with the record standing at -4 rushing yards at New Mexico Highlands in 2013.

The defensive secondary totaled six interceptions, which secured a new program record. The previous record was five, and had been matched five times following that.

Saturday’s shutout was the eighth since 2008, while the point differential is the second best in that time frame. The Pack also totaled three 90-plus yard drives in the game and marked the first time since the program was brought back in 2008.

Cameron McDondle had three touchdowns during the game along with his brother Bernard McDondle who ran in two touchdowns. The other scoring plays were by Zach Boyd who had a 90-yard recieving touchdown and one for 10 yards.

Pack offense totaled 592 yards on 63 plays. The last time the ThunderWolves racked up that many yards was when it totaled 638 yards in 2013 against Black Hills State.

The defense was led in tackles by senior linebacker Joe Rosenbrock by having nine tackles and one sack. The ThunderWolves combined for five sacks against Adams State. The Pack is ranked in fifth for sacks averaging 3.75.

Darius Williams, a redshirt-freshman, recorded two interceptions of the six against the Grizzlies.

Morgan Fox, senior defensive end, had three tackles and added to his NCAA Division II best sack total with one for a loss of 9 yards. He left the game in the second half due to an injury and didn’t return.

Senior Kicker, Greg O’Donnell went 8-for-8 on extra point attempts and averaged 48.4 yards on nine kickoffs. The ThunderWolves held the Grizzlies to an average of 21 yards per kickoff return.

According to CSU-Pueblo Athletics, the Pack has improved in several areas since returning in 2008. The Pack is 11-0 when rushing for 300 yards or more.  They are 9-0 when they have to players rush for more than 100 yards.

Additionally the ThunderWolves are 38-0 when scoring 35 points or more, 28-0 when holding the opponent to 10 points or less and 37-3 when forcing three or more turnovers.

The Pack will face Fort Lewis at home on Oct. 10 at 2 p.m. for the Hall of Fame game at the ThunderBowl. Fort Lewis was the only team to beat the Pack in 2014.