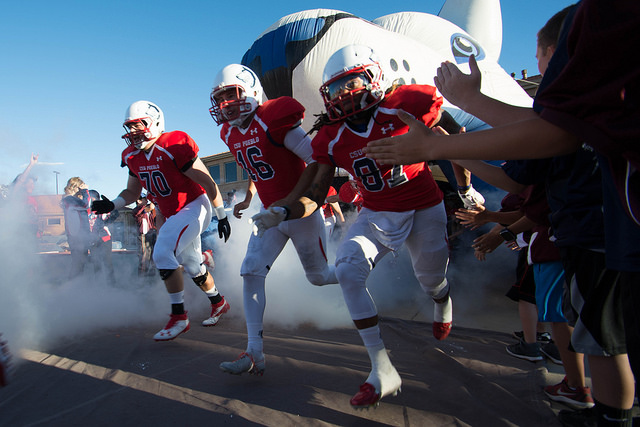 “(The) guys were on point,” said Head Football Coach John Wristen, as all three phases were able to dominate throughout the entire game.

“We had the mentality that all week that we just to had to execute on all cylinders,” said redshirt freshman Austin Micci.

Junior running back David Cardinal was able to add 38 yards on the ground and two touchdowns. Sophomore quarterback AJ Thompson was able to run into the end zone in the middle of the fourth quarter. “Got to have a stable,” said Wristen, in reference to the running backs.

In Junior quarterback Rex Dausin’s second start he looked efficient as he threw for 148 yards on 19 completions while throwing to seven different targets, Dausin also threw an interception.

The defense dominated as the ThunderWolves shutout the Cowboys for 59 minutes and 52 seconds of the game. The team only allowed two first downs out of 14, on third down and forced 11 punts. The Pack defense also had an interception for a touchdown while also forcing a fumble. The Pack also sacked the quarterback twice while also having 11 tackles for loss.

Redshirt freshman linebacker Kyle Rosenbrock led the team in tackles with eight while adding a sack, 1.5 tackles for loss and recovered a fumble for 54 yards.

Sophomore cornerback Darius Williams also added three tackles and an interception that he returned 27 yards for a touchdown.

The Pack’s special teams were able to contribute as well as senior wide receiver Daniel Wise added 91 yards on five punt returns, 80 of those yards came on one return. Sophomore wide receiver Kevin Ribarich was also able to add 33 yards on two returns. The special teams also had some problems as Wise fumbled twice and two points after attempts were blocked.

The Pack was still out junior running back Bernard McDondle for this game but he might return for the next one. Even without McDondle, the running game remained dominant. “With Bernard out, all three of us have stepped up,” said Micci.

The Pack also only committed one penalty for 15 yards as opposed to the Cowboys committed seven for 46 yards.

“Mesa is a great ball club and we are looking forward to being able to compete with them,” said Wristen.

The Pack will go on the road to play undefeated Colorado Mesa Oct. 1 at 1 p.m.

PROPEL center working to keep itself running before funding ends