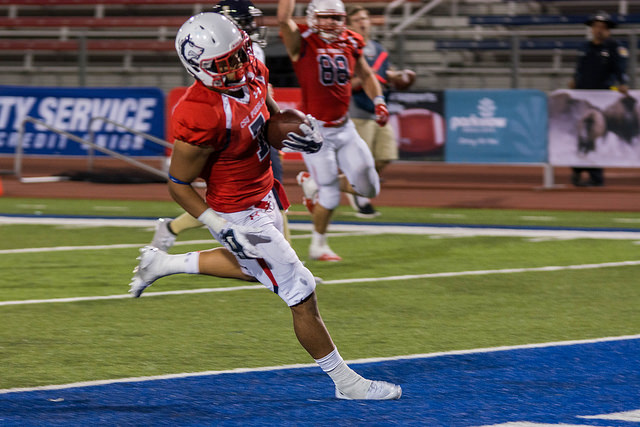 The Colorado State University–Pueblo ThunderWolves football team was able to win its first game of the season against the South Dakota School of Mines & Technology 37–10 at the Neta and Eddie DeRose ThunderBowl on Saturday.

The offense stood out from previous games. The lack of turnovers by the offense as well as the consistent movement of the ball up and down the field.

Bernard McDondle (RB #2 Jr.) was absent due to a hamstring injury. The starting quarterback was Rex Dausin (#10 Jr.).

The run-game seemed fine without McDondle, as the team netted 195 yards rushing and three touchdowns. Of those, 73 yards came from Austin Micci (#28 R-Fr.), as he carried the ball 18 times and found the end zone once in the game. David Cardinal (#33 Jr.) and Fradlet Dort (Sr. #14) also got significant carries as Cardinal got 10 for 48 yards and Dort had 14 carries for 36 yards and added a touchdown.

Dausin showed why he is the starter as he went 16-21 for 205 yards with a passing and rushing touchdown. “It was an amazing feeling,” Dausin said about starting. He showed why with good decision making and good accuracy throwing the ball. “I trust everyone around me,” said Dausin.

The offense was dominated, scoring on five of the eight drives. There was only one turnover, by Cardinal, late in the fourth quarter. They averaged six yards per play and had 400 yards of total offense.
The Pack was 9-14 on third down efficiency and converted on both fourth down attempts.

It was the first drive to begin the half when the offense really showed its dominance. Starting from the 36-yard line, the Pack orchestrated a 14 play 64-yard drive that ended in a Dort touchdown and took eight minutes and 12 seconds off the clock. “This was the drive of the game,” said ThunderWolf Head Coach John Wristen.

The defense dominated. The Pack shut out the Hardrockers in the first half. Then the defense only allowed a field goal mid-way through the third and a touchdown late in the fourth quarter.

The play of the game came from cornerback Emery Talyor (#1 R-Fr.) when he intercepted a pass and returned it for an 85-yard touchdown. Taylor made a play when the Pack needed it the most as the Hardrockers were in the middle of a 17 play 83-yard drive in the second quarter to potentially take the lead. “That play changed the momentum,” said Wristen. Talyor ended the game with two interceptions and six total tackles.

Another bright spot on defense was outside linebacker Ryan Merril (#48 Sr.). He led the team in total tackles with nine while also recording half a sack and 1.5 tackles for loss. “It’s been a long time coming,” said Merril as he got moved into the starting role.

The ThunderWolves will have a chance to keep the momentum as the Pack will play against New Mexico Highlands University Sept. 24 at 6 p.m. at the Neta and Eddie DeRose ThunderBowl.

Johnny Tapia death of a champion

PROPEL center working to keep itself running before funding ends

Dancing with the Pueblo Starz will feature talented campus duo

Written and directed opera, Strange Fruit, was a success for Dr. Volk