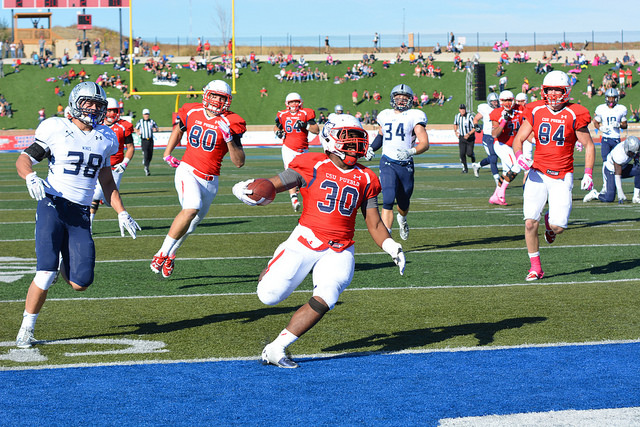 Cameron McDondle scores a touchdown during the fall 2015 season. He was awarded the Outstanding Male Athlete award. | Photo by Jason Prescott
1.2kviews
0shares

Game Recap vs School Of MInes from CSU-Pueblo TODAY on Vimeo.

In a clash of the sixth and seventh nationally ranked Division II football programs, CSU-Pueblo annihilated Colorado School of Mines Oct. 24 in a 49-21 victory that was even more lopsided than the overall score line reveals.

The Pack was invigorated by a record-setting 308-yard rushing performance by senior running back Cameron McDondle, who dominated the Orediggers on the ground throughout the entirety of the contest.

The previous program record of 304 yards was set by Frank Hester in 1965, and stood as the schools premier rushing achievement for more than 50 years. Cameron McDondle, however, might just be the kind of running back who only comes along once-in-a-half-century.

The outing regained McDondle his spot as the nation’s DII rushing leader, and also added another two touchdowns to his DII lead in rushing touchdowns.

The career day brought McDondle’s regular season totals up to 1,535 rushing yards and 19 touchdowns, putting him well on-track to surpass his own Pack record, set in 2014 for 2,014 rushing yards.

Although McDondle was definitely the ThunderWolves’ most impressive offensive weapon on the day, he was by no means the only member of the Pack offense to contribute to the big win.

Sophomore running back Bernard McDondle was once again heavily involved in the Pack’s offensive attack, rushing for two touchdowns on the day and marking the fourth straight game that both McDondle brothers have had multiple touchdowns.

Senior wide receiver Kieren Duncan was once again the Pack’s leading receiving weapon, totaling 61 yards, including a 49-yard score on an A.J. Thompson pass in the second quarter. Senior tight end Zach Boyd and junior running back Fridley Dort were also involved in the action, each providing one score.

In an outcome that has almost become routine for the Pack, CSU-Pueblo’s defensive effort was once again spectacular.

Despite totaling a season-low one sack on the day, CSU-Pueblo’s defense was stifling to the opposition, holding an Orediggers offense that ranked second in the nation in total yards-per-game with 546.6, to only 367 yards.

Senior CSM quarterback Justin Dvorak entered the contest third in the nation in passing yards and second in touchdowns, averaging 373 yards and more than four TDs per game. Against the Pack’s stingy defense, however, Dvorak was held to just 226 yards passing on 36 attempts and a lone touchdown.

The game also saw the return of senior Pack defensive end Morgan Fox, who logged his first snaps since suffering a dislocated elbow in week five against Adams Sate. Prior to his departure, Fox led the nation in sacks and will be a pivotal piece in strengthening the ThunderWolves’ pass rush heading into the last three weeks of the regular season.

All in all, Saturday’s victory is one that might be considered a statement win. A dominating performance over a previously undefeated team who ranked in the top five in the nation in multiple offensive categories is certainly the kind of victory that gives a team momentum.

With just three games left in the 2015 regular season, the Pack seems to be hitting its stride at the perfect time to defend its 2014 national championship.

With Cameron McDondle looking as dominant as ever, the defense getting healthy and Thompson looking increasingly comfortable as the Pack’s starting quarterback week after week, the ThunderWolves might just be placing themselves in the perfect position to make another run to Kansas City.

A look at student organization requirements and retention