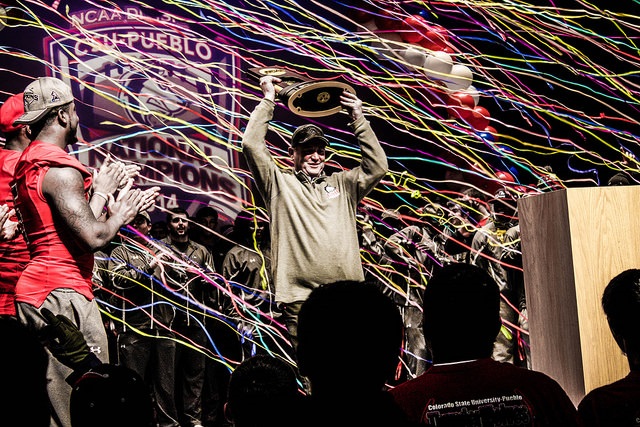 The Colorado State University-Pueblo football team took care of some “unfinished business” in December when they brought home their first national championship. In response to their 13-0 victory over Minnesota State-Mankato, the university and the Pueblo community came together to honor the team and coaches in a Celebration of Champions Friday at Memorial Hall.

More than 1,000 ThunderWolf fans were on hand for the event in downtown Pueblo. The festivities began with a parade that included CSU-Pueblo’s marching band, cheer and dance squads, mascots Wolfie and Tundra, CSU-Pueblo President Lesley Di Mare and members of Pueblo city government.

Although the game took place more than a month before, there was no shortage of excitement and team spirit during the event as hundreds of fans lined the sidewalks along Union Avenue, cheering, dancing and taking photos.

Near the entrance to Memorial Hall, CSU-Pueblo’s award-winning student radio station, REV 89, provided live broadcasts from the event and kept the crowd energized. And the university bookstore set up a mini storefront to offer championship gear to fans.

As the parade ended, the crowd joined the team inside Memorial Hall for a rousing pep rally, highlighting the history of ThunderWolf football and this year’s journey to the Division II National Championship game in Kansas City.

During the pep rally, fans heard from community leaders, including County Commissioner Liane McFadyen and City Councilman Steve Nawrocki. Pueblo Chamber of Commerce President Rod Slyhoff hosted the rally and spoke about watching the football program grow since its reinstatement just a few years ago in 2008.

Di Mare said the victory was exciting, not only for the team and coaches, but also for the university.

“This championship increases awareness of not just our athletic program, not just football, but our academic programs and student life offerings in Colorado and nationwide,” she said.

McFadyen and Nawrocki presented Di Mare with the key to the City of Pueblo, which she accepted on behalf of the university. As he handed the award, Nawrocki added that it wasn’t just the key to the city, but also the key to Pueblo’s heart.

He thanked the “outstanding” marching band, who accompanied the team to Kansas City, recalling how they energized the crowd at the pregame pep rally. He then thanked the city of Pueblo and the fans, many of whom made the nine-hour trip to support the team in the championship game.

Finally, he turned his attention to his coaching staff and players, highlighting some of the graduating seniors, including quarterback Chris Bonner, wide receiver Paul Browning and cornerback Stephan Dickens.

Wristen became emotional as he thanked them for allowing him to be their coach, what he referred to as “the best job in America.”

The rally closed with the players and coaches gathering in a heated tent just outside Memorial Hall to sign autographs and take photos with fans.

Both Browning and Dickens said they knew the team had already begun to prepare for next season and another championship. According to fan reaction, the university and community won’t have any problem planning another Celebration of Champions.

More than just love in that mug