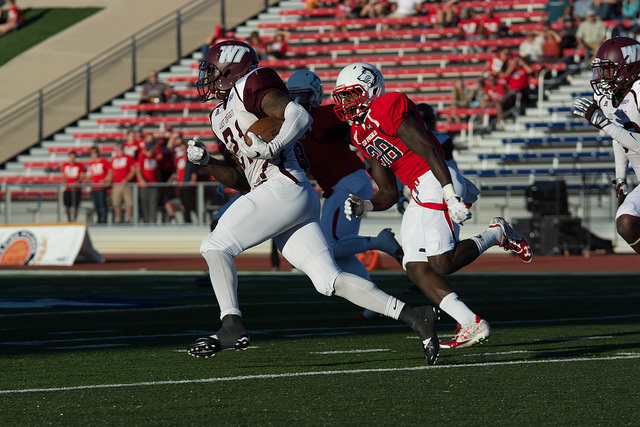 The Colorado State University-Pueblo ThunderWolves football team started the season off 0-2 after losing to West Texas A&M 26-10 Sept. 10, to bring their 29-game regular season winning streak at the Neta and Eddie DeRose ThunderBowl to an end.

The passing game seemed to be the issue this game with a total of three interceptions thrown, two by sophomore AJ Thompson, and one by junior Rex Dausin.

The defense played better, according to Wristen. There were two offensive touchdowns and upon review one of the touchdowns did not look like a catch that resulted in the score, according to Avery Lewis who was recording the play. Sophomore linebacker Brandon Payer was all over the field as he gathered 14 total tackles with 10 solo, and also getting three tackles for loss.

The Pack’s defense still has some kinks to work out as the defense has to do a better job tackling, said Wristen. A lack of pressure seemed to allow the opposing quarterback time to find receivers open.

The rest of the points were from two field goals and an interception return for a touchdown.
Special teams played a significant role for the Thunderwolves good and bad. A good way is that the team was able to block a punt and an extra point late in the game to try and spark a comeback. A bad way was freshman kicker Nathan Taylor missed three field goals throughout the game.

This game marked the Pack’s 100th game since the restart of the football program back in 2008. Also, this season is the first time the Thunderwolves started 0-2 since the outset of the program.

The new Leomiti Warrior Center unveiled at halftime. The center is a new 10,000 square foot weight room dedicated to Defensive Backs coach Donnell Leomiti because of his successful fight against cancer. “It’s an honor to have my name up there,” said Leomiti.

The Thunderwolves look to bounce back strong against South Dakota School of Mines at the Neta & Eddie DeRose Thunderbowl Sept. 17. This game will start at 6 p.m. and will be the first-ever meeting between the two schools.

Students prepare to check out of dorms as semester winds down