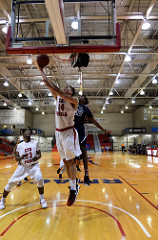 To start the week, the women faced off against South Dakota Mines & Technology, Feb. 28. The women were able to feed off of sophomore, Molly Roher’s 23 points in a 69-65 effort.

The pack men were also able to dominate the turnover battle, forcing the South Dakota Hardrockers to commit 23 turnovers. The pack were able to convert those turnovers into 20 points for themselves.

The pack had 20 more points in the paint than the Hardrockers and that is thanks to Roher’s 23 points. The game was tight throughout all four quarters but Roher and junior, Taylor Long led the pack, scoring 15 of the teams 19 points in the fourth period.

The victory against South Dakota Mines & Technology guaranteed that the rest of the RMAC Women’s Tournament will be held in Pueblo.

The men fell short 54-52. The pack were able to go into the half with a 30-27 lead but the Colorado Christian Cougars came out strong in the second half and won the scoring battle 27-22.

Junior, Will Newman, was able to accumulate 21 points and knock down five 3-pointers for the pack. Newman also added four rebounds, four assist and four steals. “I just wanted to lay it all out on the line,” Newman said. “Doesn’t really mean much when you don’t get the victory though,” he added.

Colorado Christian finished off the game on a 11-0 run that brought the game to 52-47 with only 30 seconds left, forcing the pack to foul but couldn’t get the Cougars to miss at the free throw line.

The men will know their NCAA Tournament fate on Sunday, March 5 at 8:30 p.m. when the NCAA streams its selection show on NCAA.com.

With the loss of the men’s team, ending their RMAC shootout run, the women returned to the court Friday, March 3 to face Regis University.

On Jan. 28, the women were able to beat Regis 65-51 but the outcome this past Friday was different as the Regis Rangers beat the pack 77-71, eliminating the Thunderwolves from the RMAC tournament.

The women trailed the Rangers for the entire game, starting off the game on a 7-0 run. In the first quarter the pack went 1-of-10 from the field. The score was 18-13 after one period, after the pack knocked down eight free throws.

Katie Cunningham, junior, picked up her fourth double-double of the season sinking 16 points which was a season best and also picked up 11 points from the foul line. Senior, Angie Moore had an 11 point night and also recorded two blocks against the Rangers.

RMAC player of the year, Molly Roher, led the team with 19 points and also tallied two blocks, giving her 68 total blocks for the season, that is second most in school history.

Head Coach, Jim Turgeon, said his team has been waiting for the NCAA tournament for a few weeks now. “The first thing is we need to take a couple days off to get physically and mentally rejuvenated after this long season.” Turgeon said. “It’s been our number one goal all season to get to the Elite 8 so I think we’ll bounce back from a tough loss.” He said.

Have being No. 1 in the South Central Regional Rankings poll heading into the tournament, The Thunderwolves will figure out Sunday, March 5, if they will host a NCAA regional game.

Not just your mother’s clothing