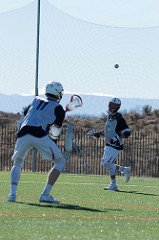 The Colorado State University-Pueblo men’s lacrosse team is heading into their 2017 campaign, led by head coach Sean Blair, the pack look to bounce back strong after a not so good 2016 campaign, going 3-11 and 0-8 in conference play.

The upcoming 2017 season is a fresh slate for men’s lacrosse and is a chance to get back to their winning ways. Being only the third season that the ThunderWolves are a program that competes in lacrosse, the 2016-17 season is a great way to build a foundation that can last many years.

Adam Lange, junior, is one of the newcomers for the men’s lacrosse team. Lange is aware of the disappointing 2016 season and is confident about the team this upcoming season.

“We started spring ball a week earlier and had two a days. That for sure is giving us some confidence, coming into the season our expectations are as high as anyone right now.” Lange said.

The pack have played three exhibition games to begin the season, those of which don’t count towards the overall record but give the team confidence before heading into their first official game.

The ThunderWolves will start the official season in a Rocky Mountain Conference opener against Adams State University Saturday March 4 at 5 p.m. at the Art & Lorraine Gonzales Stadium. The matchup against the Adams State Grizzlies will kick off a three-game home stand where the pack look to build momentum.

The ThunderWolves are looking to build on its 3-11 record from a season ago. With the help of getting three of the top four point getters from a year ago, it’ll be a good place to start building chemistry to last throughout the season.

Head coach Sean Blair is approaching his fourth season as the coach of the men’ lacrosse team. Blair was the first coach hired for men’s lacrosse on Nov. 20, 2013. “They’ve been working hard and we’re just focused on winning one game at a time.” Blair said when asked about expectations this upcoming season.

The pack look to start strong and carry that one game at a time mentality throughout the whole season and rebound after the 2016 campaign where they finished last in the conference.

Picking up the pieces