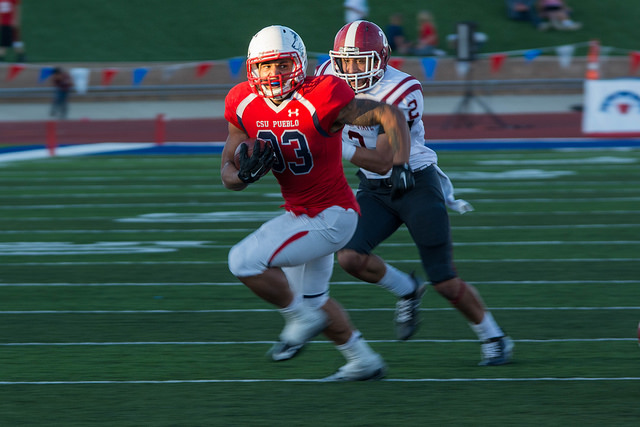 The secondary for the ThunderWolves came in a clutch to help secure a 27-14 victory over the Chadron State College Eagles at the Neta and Eddie DeRose ThunderBowl on Saturday, finishing the season off with a six-game winning streak and a final 8-3 record.

The Pack secondary was the factor in this game as they got three interceptions and returned one for a touchdown when the Pack needed points. That key interception, which was returned for a touchdown, happened in the second quarter when the ThunderWolves were down 14-0. That turned the tide as Chadron never scored again and the Pack went on to score three more touchdowns.

The secondary also only allowed 89 yards passing on 43 attempts. The key member of the secondary was senior safety Joseph Jones who was the one that returned the interception for a touchdown. Jones also totaled seven tackles and recovered a fumble late in the third quarter which the offense turned into a touchdown and a two-point conversion.

start to get going until the interception, returned for a touchdown, jump start the offense, and the team as a whole.

It was after that when the Pack offense was able to pick up some steam. The only steam the offense could muster was after the defense got them the ball. Two of the three offensive touchdowns came immediately off a turnover. The third touchdown was the drive following the interception returned for a touchdown.

The offense was still able to manage 159 yards on the ground led by redshirt freshman Austin Micci and junior David Cardinal combining for 118 yards and 22 carries. Thompson played well but not mistake free. His running ability provided and extra dimension to the offense. Thompson was able to avoid sacks while also gaining yards that would not otherwise be there and he also converted a two-point conversion with some fancy footwork but fumbled the ball while running with it — more than he should have. Thompson ended up 12-21 for 117 passing yards, two touchdowns, an interception and a lost fumble. Thompson’s main target was senior receiver Larry Clark who caught seven passes for 69 yards and two touchdowns.

With an overall record of 8-3 on the season and 8-2 in the RMAC earned Colorado State University–Pueblo a share of the RMAC championship, along with Colorado Mines and Colorado Mesa. This is CSU-Pueblo’s sixth title and fifth in the last six seasons. The 8-3 record is also the seventh straight year with eight or more wins.