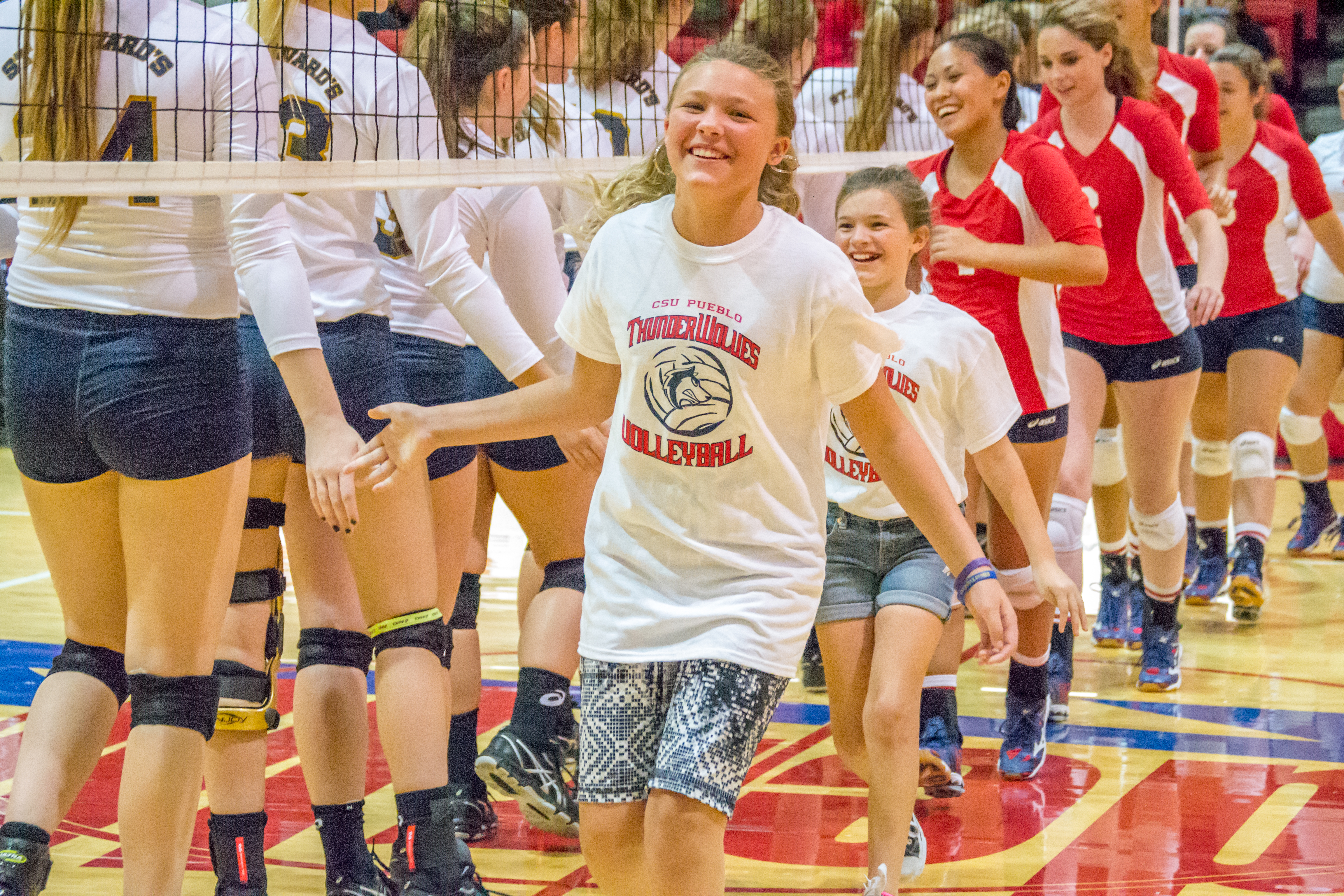 Paige and Shannon Vrana were welcomed to the CSU-Pueblo volleyball team as honorary members after losing their mother. | Photo by Dustin Cox.
2kviews
0shares

At a CSU-Pueblo volleyball game on Sept. 11, two special guests were invited to join head coach Jen Gomez on the bench as honorary members of Pack volleyball.

Paige and Shannon Vrana, 10 and 11, who live in Avondale, Colorado and attend Avondale Elementary and Vineland Middle school’s respectively, high-fived players, listened in on team huddles and cheered enthusiastically throughout the course of the game after being invited to attend as honorary members.

“It was actually pretty fun, I kept getting excited when we kept getting points and when we’d get close, I always had to jump for joy,” Shannon said.

“It was crazy!” Paige said.

After losing their mother to an act of domestic violence in their Wyoming hometown, Gomez looked at the gesture as a great way for her volleyball team to positively impact the lives of the two young girls, who are new to the Pueblo community.

“I just thought what great way for my kids to help out,” Gomez said.

“I think my volleyball team players are phenomenal young women anyways and I just thought what a great way for them to reach out and influence the lives of these young girls to show them its all going to be OK and they’re going to be a part of our team in their own special way,” she said.

The team planned a variety of activities for the girls in order to make them feel at home on the team.

“They got to stand out on the end line and be introduced with the team and run through the line and shake hands, you just saw their smiles were as big as they can be,” Gomez said. “These kids had a ball.”

“(My favorite part) was meeting the players,” Paige said.

“Mine was sitting on the bench with the team and trying to cheer them on,” Shannon said.

The experience was a heartwarming one, not only for the girls themselves, but also for all of the players and coaches of CSU-Pueblo volleyball who knew their story.

“I just kept looking down there and I would just smile because I knew that at least for these couple of hours, everything is OK,” Gomez said. “I have a special place in my heart for kids.”

The girls said they plan to stick with volleyball in the future and their relationship with Pack volleyball has already enhanced their passion for the sport.

“I have a plan for the future to play volleyball when I’m a grownup,” Paige said.

Shannon has already started her young volleyball career, playing for her school’s team at Vineland Middle, where her favorite position to play is setter.

“I started playing when I was with my mom,” Shannon said. “We played at the recreation center there and I got really interested in it.”

“This is the college that I want to go to,” Shannon said.

Although Paige’s school, Avondale Elementary, doesn’t have a volleyball team, she looks forward to playing when she is in middle school like her sister does.

Friday’s game might have been the first Pack volleyball game as honorary members for Paige and Shannon, but it is not likely to be their last.

“They’re invited to every home game we have, they get to be with us on the bench and they go in the locker with the team beforehand,” Gomez said. “My team just talks with them and lets them have fun and hang out.”

Paige and Shannon seemed to enjoy the experience immensely and Gomez believes the girls’ presence is also extremely beneficial to the players on the team.

“It’s really great for my team as well to be around these young girls who just kind of want to belong somewhere,” she said. “Our players get to see that, yeah, it is just a game, but to these young kids it’s a big deal and how you treat these young people is a big deal.”

“To see my kids grab their hands and give them high-fives and stand by them and give them a hug …  I already knew I had special kids on my team here at CSU-Pueblo but to see the way they embrace these young girls just really makes my heart smile.”

The girls’ aunt, Mandi Meece, who moved out to Avondale from Wyoming around the same time as the girls, said it is important for the girls to feel at home in their new community.

“This is their home now and they need positive influences,” she said. “(It’s great for) the friendships that they can build and the learning they can do, everything, it’s good all the way around for them.”

“I think that they really enjoyed this whole experience, being able to come here and be under the coaches and the girls’ wings I think it really meant a lot to them.”

For Gomez and Pack volleyball players, Friday’s game was a chance to see firsthand the impact college athletics can have in comforting young people through hard times, if by nothing else, providing a brief escape.

“For just a couple of hours they’re not just in their world they’re in our world, they’re part of Pack volleyball, and they’ve got 18 of my players around them, so they’re acting silly and high-fiving and watching the game and cheering so it’s just about getting them into a different environment where for a couple hours its just about a game and cheering on a game,” Gomez said.